This post includes sponsored links from Entropy, check the end of this post for a great giveaway.

Once upon a time there was a castle.

In front of the castle there was a big forest, at the edge of the forest there was a river, and after that was The Land of Giant Mushrooms. 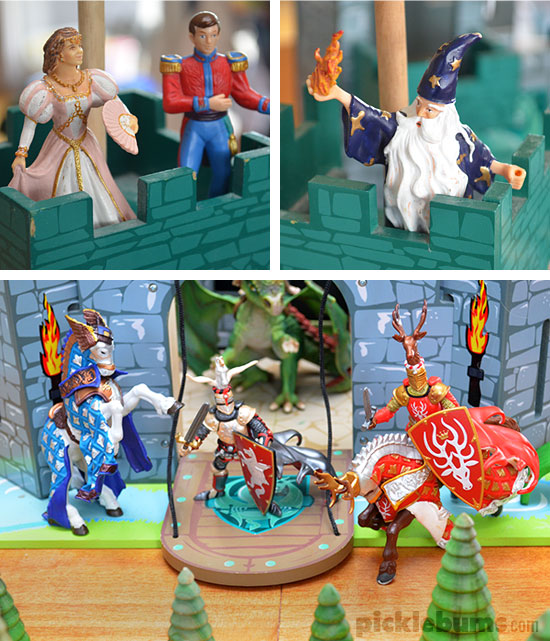 Lots of people lived in the castle, including fairies, knights, a prince, a princess, and a wizard.

The castled was defended by some brave knights, a boy with an eagle, and a friendly dragon. They needed to be very brave, because some baddies lived in the The Land of Giant Mushrooms and they were really really bad, and mean. 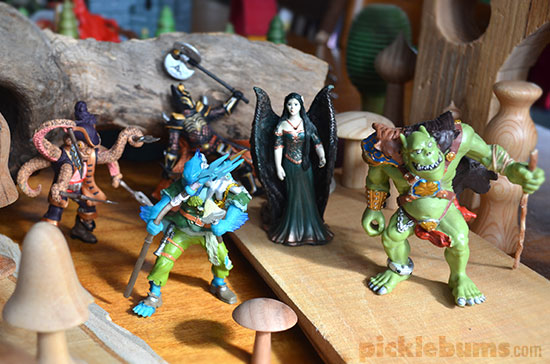 The boss of the baddies was the evil fairy queen. There was also a bad knight and all kinds of scary baddies.

One day the evil queen made her baddies attack the castle! 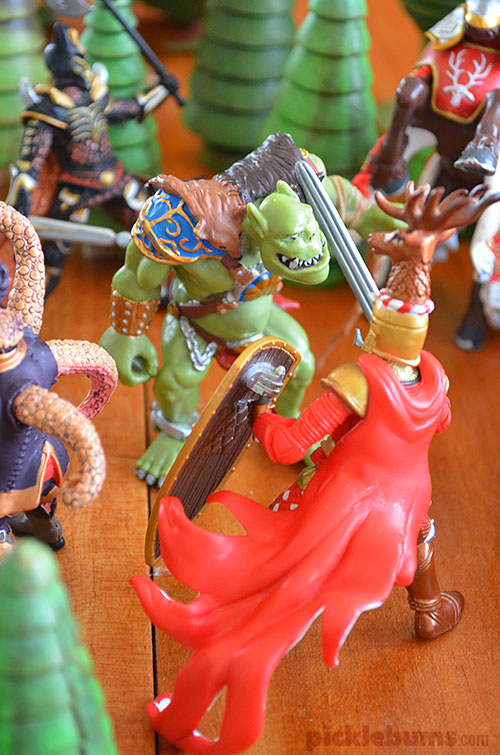 There was a big fight, and lots of shouting, and some blood, and the wizard did a spell, and one of the knights died. Then the other knight shouted “Send out the dragon!” 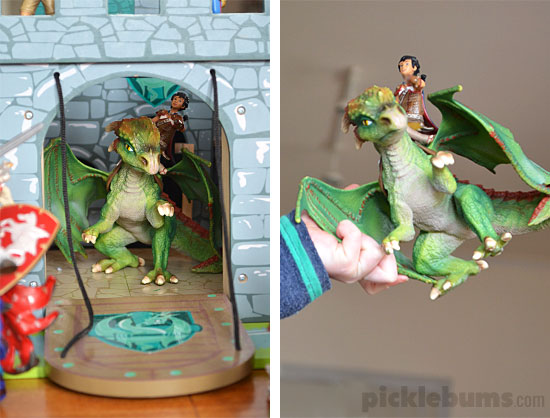 The big friendly dragon swooped down and caught the queen and put her in the dungeon. 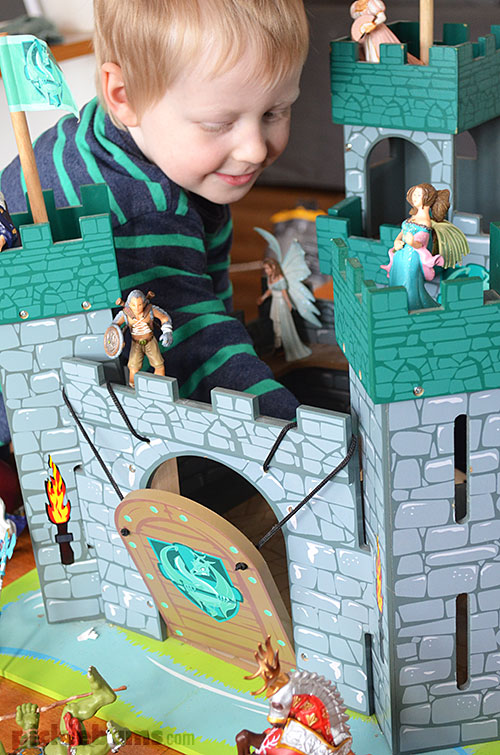 Then they put up the draw bridge and the people in the castle could all go to sleep and be safe.

It may look like just a bit of playful fun and it is… but while my four year old sets up the castle scene and then acts out his story with the figurines, he is also totally immersed in holistic learning. He is using skills from every developmental area as he imagines the scene and creates the story.

He is using his motor skills and co-ordination to build the scene and balance the figurines on the turrets. He is practicing pre-reading skills by making up his own story with characters, a beginning, a middle and an end. He is figuring out social issues like what makes a character a goodie and what makes them a baddie and what happens when they die?

I could go on listing skills that Noah is using and developing as he plays with the castle, but you get the idea, this may just be a bit of imaginative play but it is also a whole lot of learning.

This is why I love imaginative play, because it combines multiple skills and you can just about see the learning and growing happening right before your eyes!

Win Your Own Castle and Figurines from Entropy.

This competition is now closed.

Congratulations to ‘A.S’ who’s clever story including the word ‘entropy’ won them this fab prize!

Over the years we have collected lots of great figurines for imaginative play and we added the great castle one Christmas. People often ask me where we got the Schleich and Papo figures from and where the great castle came from and I’m always happy to recommend a great Australian toy shop – Entropy.

I shop online with Entropy every Christmas and have always been impressed with their range and service, so when they contacted me asking if I would like to work with them I was super excited! And I’m even more excited to give away a fabulous Papo castle play set from Entropy! 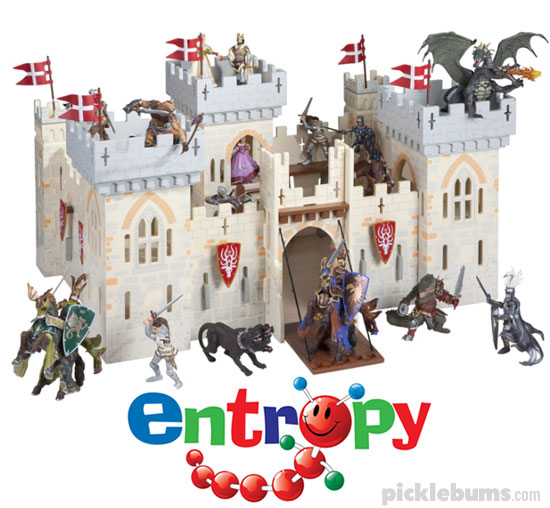 One lucky reader will win this amazing Papo Weaponmaster Castle (RRP $169), a Papo Castle Baseboard (RRP $19.95) and $50 worth of Papo figurines!

To enter pop over to the entropy site and check out the Papo figurines, then leave a comment on this post telling me which figurines would live in your castle and why. The most interesting, or funny comment will win.

Which Papo figurines would live in your castle and why?

Terms and Conditions.
You must be an Australian resident with an Australian post address to enter.
You must provide a valid email address and entries are limited to one per household.
Entries close Wednesday September 3rd 2014 at midday EST.
One winner will be contacted by email and announced on this post before September 30th 2014.
Entries will be judged on merit and creativity.
Prizes include a Papo Weaponmaster Castle (RRP $169), a Papo Castle Baseboard (RRP $19.95) and $50 worth of Papo figurines and postage within Australia.
Prizes may differ to those shown here and the figurines component of the prize are not necessarily those shown in the image and will be selected by Entropy staff to the nearest monetary value of $50.
The winner must contact me within 5 days or the prize will be re-drawn.
The winner agrees to have their contact details passed on to the appropriate PR company or brand representative who will send out/organise the prizes directly.

{disclosure: This is a feature post – find more information about feature posts here. The castle and figurines featured in this post belong to my children and were bought from Entropy and other stores, over many years, prior to this arrangement. The opinions shared in this post are my own. }