When we got home from kinder at about 12:30 it was 33 degrees (celcius), hot and sunny. We hung out the washing in the the backyard. The girls played with a bucket of water (bore water!) in the sandpit. I closed windows and blinds to keep the heat out.

About two hours later it clouded over again. I could hear thunder rumbling around, but summer storms often rumble around our house and never produce anything. I opened windows to let in the cool breeze.

An hour after the first rumble, the storm hit. Big storm. Thunder and Lightening. Wild wind. Hail. Lots of rain. The paddocks became lakes. Our driveway, a river. My washing has blown off into the paddock. I closed the windows and put towels in front of the front door to keep out the rain and ice. I turned off the PC and the girls and I sat on the table behind the couch and watched the storm.

Now, an hour later, there is blue sky again, sunshine. The only reminder of the storm is the puddles and the pile of diamonds it left at Ganesh’s feet. 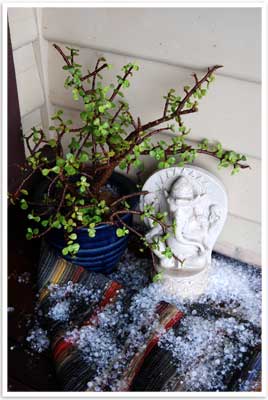 Home » Four Seasons in One Day…