We taught the big kids to play Uno when they were around 5 and 8 and it was a huge hit. So when I found the pack of uno cards while cleaning out the cupboard, I dumped them in the ‘I’m bored’ toy bag that lives in my car for those moments that I find myself stuck with cranky, bored, kids and nothing to do. During this past week the Uno cards have been out on several occasions, and only one of those times did we actually play a game of Uno!

I have discovered that Uno cards are good for more than just games of Uno. There are lots of other games you can play with Uno cards! 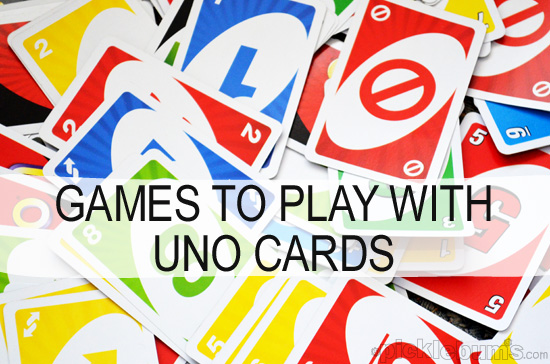 “If you have a pack of Uno cards, you’ll never be bored again!”

That’s what I told my kids the other day while we were waiting at the Doctors. Even if you are by yourself there is always something fun you can do with a pack of Uno cards.

Here are a couple of easy games you can play with a pack of Uno cards and a bunch of bored kids. 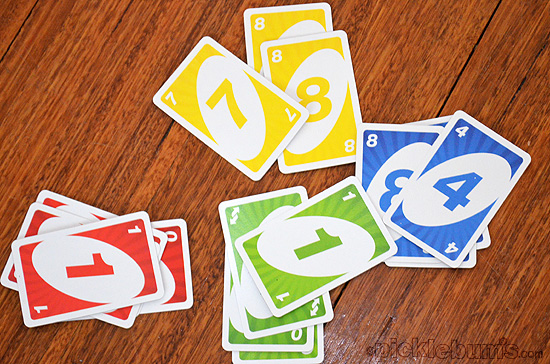 For little ones who are just starting to learn the names of colours, sitting and turning over uno cards and naming the colour you see is a simple and fun beginners activity.

You can also do the same thing for preschoolers who are learning to identify numbers. To make it a bit trickier for older preschoolers turn over two cards, place them side by side and get them to say what number both of them make up. For example : a two card and a three card make 23.

Or play the speed number recognition game – turn over a card and the first person to say what number it is correctly keep the card. The person with the most cards at the end wins!

A simple set of Uno cards is great for playing snap or memory. In many ways they are easier for young players to use because the they are just matching colour and number, not colour, number and ‘suit’ like when you use a regular set of playing cards.

You can also play lots of other simple card games like snap and go fish with a pack of Uno cards. Sort the cards into a smaller set with just one number in each colour, or play with the whole deck for a loooong game! 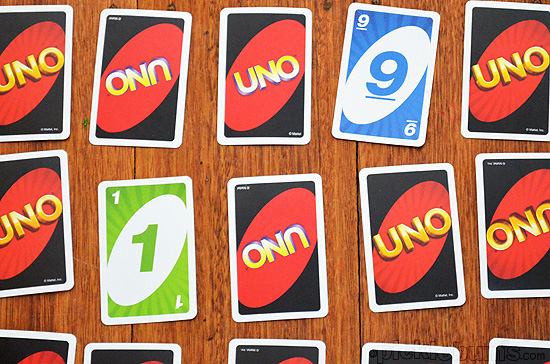 Flip Ten is kind of like Memory but involving maths skills. We played last holidays and it’s quite challenging, especially if you have terrible maths skills like I do!

War! You can play this game with Uno cards just like you do with regular cards. You can make it more interesting by leaving in the non-number cards and making up your own rules about them, or by turning over two cards at once and having to add them together or even multiply them to see who has the higher number. 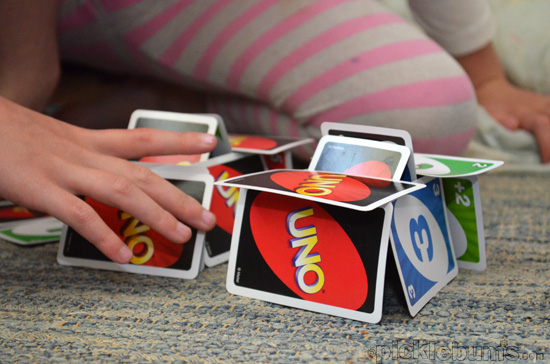 Crazy Things to Do with Uno Cards

A well worn set of Uno cards is great for making card houses. My kids LOVE doing this even though it can be quite a challenge to get started and to get the cards to stay up long enough to build anything with. Building on carpet is easier than on a table or hard floor!

We’ve also played silly throwing games with the cards. The classic ‘throw the card into the hat’ type games as well as seeing who can get their cards to go the furthest when thrown. Games like this with a little more action are good for small people who are not so great at sitting still!

So… have you got a pack of Uno cards sitting in the cupboard? What great games can you play with Uno cards?

If you haven’t got a pack of Uno cards, definitely put them on the list for birthdays and Christmas! 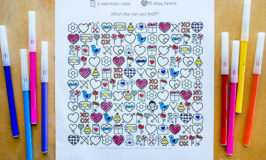