I really need to remember, when I can’t get to sleep, watching late night TV is not the best option.

Last night I stumbled across the last in a two part series on ABC2 called ‘Help Me Love My Baby‘.

I blamed pregnancy hormones as I got all teary watching this mother of twins learning to bond with her babies. But to be honest, watching and hearing the babies crying in unison and seeing the look of shear exhaustion, confusion and fear on their mother’s face, I was right back there in the early days of our twin’s lives.

The show followed a young mum as she went to therapy sessions over a number of months to learn to respond to and bond with her babies, particularly one of them. Her beginning story was so familiar to me. She never thought she’d have twins and was still coming to terms with that fact when they were born, by c-section, eight weeks early. This Mum had other issues from her childhood that also played a part in her bonding issues but I could identify with her on so many levels. 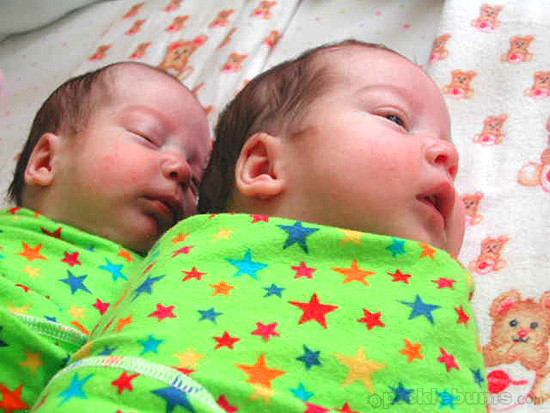 I didn’t bond with my babies when they were born.

I would never had admitted it at the time, in fact I don’t think I had even a shred of conscious knowledge of it, but looking back, it seems so obvious. I was detached from my girls even before they were born.

When I found out there was two in there it took me a long, long, LONG time to process that idea (even now I still have moments of shear confusion when I realise it is part of my life). I was 25 weeks pregnant when things first started to go wrong. I had four weeks in and out of hospital with various procedures, medication, information, and statistics of how likely our babies were to survive. Then 11 weeks early, they were born, in a hurry, via c-section.

I cope really well with stress, and disaster, because I am practical. I think through all the scenarios (ok I worry through them) and then work out how we’ll cope in a practical sense. On the emotional side I’m not so together.

It wasn’t intentional, and I didn’t realise it, but while I was pregnant, I coped by making a little gap. Just a little space that would keep me functioning in case the worst happened. Then I dismissed the idea of loosing them and got on with being practical.

It was the same after they were born. They were both alive and fighting so perhaps I let the gap lessen a little, but it was still there. I needed that gap to get through all the crap that life with two prem babies throws at you.

Don’t get me wrong, I did love them… I just didn’t love them.

When they were both sleeping I’d often catch myself looking at them and suddenly realising they were mine. They didn’t really feel like mine. They could have been someone else’s babies, babies I was just looking after for a while…. but they weren’t.

As I watched the documentary last night and saw this mother learning to gaze into her babies’ eyes to make a connection, I really felt for her. When you have two unsettled babies there isn’t much time for eye gazing. When they get upset, you get upset and stressed, which makes them stressed, which makes you stressed… it’s a vicious circle compounded by a million other little things that I’m sure lots of mother’s go through. It’s just that some of us have that little gap…

Things got better for us when the girls were around six months old. It was a combination of things, like sorting out the right medication for their reflux, getting back on track with feeding, connecting with some wonderful like minded mums, finding one or two professionals who took the time to tell me I was doing a good job…. and just time.

I started to enjoy them as well as simply cope, and the gap slowly disappeared.

I don’t have guilt over our lack of ‘bonding’ any more. I have plenty of hefty Mother Guilt over a lot of other things, but surprisingly not over this.

I was caught up in a cycle of crappy circumstances – A bucket load of stress while pregnant, a c-section well before my body even thought about giving birth, no happy post birth hormones, no babies to hold, expressing instead of breastfeeding, more buckets of stress and exhaustion while the girls were in hospital, early problems with breastfeeding, later problems with breastfeeding, reflux x2, failure to thrive x 2…..and the list goes on. Not exactly a balanced equation for building a loving bond with my first children. Given the circumstances I think the fact that we coped at all is pretty darn amazing.

I do, however, worry.

I worry about long term effects. I worry that Izzy’s melt downs and Zoe’s sensitivity are somehow related to our lack of early bonding. I worry that their social choice to stick to each other like glue forsaking all others is because of our less than perfect start. I know it might not have caused any of these things, but I also know enough to know that it might have.

I also know there is no point in worrying, but I still do.
It’s what I do, it’s how I cope.

Home » I Didn’t Bond with My Babies