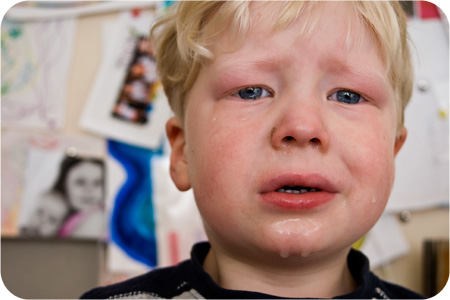 You’d think I’d know this from past experience. Not just because I’ve been here before as a parent, but also because this used to be my job. People used to pay me to wrangle three year olds for 8.5 hours every day.

I’m sure I’ve subconsciously blocked all memory oh those hard bits and only kept memories of the good bits, other wise I’m sure there is no way I would have had another child…. let alone a fourth one. (Yes I’ll be writing this post all over again in three years time!)

But there are good bits.

And then, the good bits vanish, and you are left with a screaming, flailing, snotty creature that you are sure can’t possibly be related to you.

There is punching and yelling, spitting and kicking. The word ‘no!’ and ‘go away’ ring in your ears constantly. And the tears…. so many tears.

The suddenly he crawls into your lap and tells you he loves you…. and the whole Dr Jekyll and Mr Hyde cycle begins again.

As hard as it is to parent a three year old, it must be just as hard to be a three year old.
To be so grown up one moment and then so little and out of control the next must be very confusing and frustrating. To be one giant vicious cycle can’t be much fun.

I am trying to remember that.

I am trying to remember that he is still little. That he is dealing with a new brother. That he is just three.

I’m  trying to set firm but fair limits, because I believe he really needs them right now. He’s going to push those limits  but he needs to find something strong and solid to bash up against when he does it. Even when that causes floods of heart broken tears, which it always does, then he needs to find comfort and understanding.

I’m trying to give him words. Even though most times he can not use them, hopefully one day, when his world settles down a little those words will be waiting for him.

I’m trying not to sell him on ebay….. even though I think his blonde hair and blue eyes would fetch quite a price.

And I thought two was tough!?!