Reading the comments from my last post about Muski’s birth (no still no name, so you can stop asking!) many people asked about the how the girls were born.

I went back and read through some old old blog posts (very scary but highly recommend it to all who blog) thinking that surely I had blogged about the girl’s birth at some stage, but nope.

I have blogged parts of our story but never the whole thing and never the actual stuff about how and when the girls were born… and it really probably would put Muski’s birth into better perspective. But I should warn you all this will be long and rambly because it is a long and rambly story! 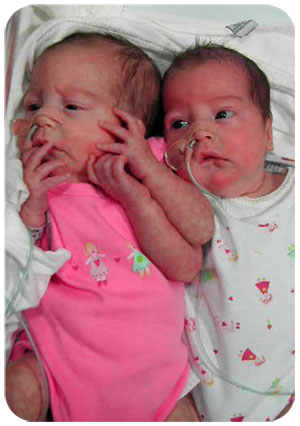 So I am guessing if you read my blog you have already cottoned on to the fact that we have identical twin girls who will turn four in November. We found out we were having twins at our first OB visit at around 11 weeks. Our OB did the initial quick scan and, after a long silence, when I was sure something was horrible wrong, he said those fateful words…

I died on the spot.

I thought he was joking initially.. no way was I having twins and I certainly wasn’t having triplets.

A full specialist scan a week later confirmed I was right on one account, it wasn’t triplets, only two babies. Mono amniotic twins (meaning they share the same outer sack) with only a thin membrane between them. A single large placenta and almost definitely identical twins (the only way to be sure is with a DNA test after birth which we had done as part of a research project and they are 98.9% identical, about as identical as you get without being con-joined twins). That was the first time we heard the term ‘Twin to Twin Transfusion Syndrome’ (TTTS) when it came up as part of a list of possible complications and things to look out for. I was still far from getting my head around the ‘two babies’ part so didn’t even stop to think about the possible complications.

Early on the pregnancy was uneventful. I spewed a lot (though we now know that I just do that when pregnant so that was nothing special). I was scanned every month to look for signs of complications, most especially TTTS which initially shows up as a size discrepancy between the babies… all was happy and well until about 25 weeks.

I wasn’t happy at work so had decided to cash in my leave and finish earlier than planned. During my last week at work I suddenly went from not very pregnant looking to incredibly pregnant looking and the night before my last day I stared to feel horrible. My belly seemed suddenly huge and hard and hot, my ribs hurt, my back hurt and I just felt wrong. Initially I thought this was just what ‘very pregnant’ felt like but I woke early on the morning of my last day and knew something wasn’t right.. I dragged myself into work to open up (no one else with a key) and then headed off to see our OB. He took one look at me rushed me upstairs to the labour ward.

In 48 hours things had gone from fine to horrible.
At 25 weeks I was in pre-term labor, although I couldn’t feel it because the sudden increase in fluid made me hurt all over. Twin 1 (who turned out to be Izzy) was swimming in extra fluid, while twin 2 (Zoe) had none and was stuck high under my ribs, with barely any bladder showing on the scan… that was a bad sign.

I was given drugs to stop the labor and had 2.5 litres of amniotic fluid drained from around twin 1 to try and even up the pressure and ease the TTTS. I was admitted on bed rest and we started talking about what it meant to have prem babies.

The drugs stopped labour, the TTTS improved after the amnio-reduction and I was allowed home after 5 days in hospital. I hadn’t been home a week when things went wrong again. Again I was admitted with pre-term labour and severe TTTS – more fluid was drained from around twin 1 and we waited to see if things would settle again. They did, but I knew if things went bad again the babies would have to be born.

Having TTTS meant the babies had to be delivered by c-section. Because the TTTS could rapidly get worse if I labored and the extra fluid put so much pressure on twin 1’s heart and brain function, and the lack of fluid could destroy twin 2’s bladder risking labor was out of the question. The only question remaining was how much longer I could keep them in and when were they safer out than in.

I was pretty devastated that I’d have to have a ceasar. All my plans for a lovely natural birth centre birth were shot to pieces and despite the fact that I knew it was the right thing to do, the only thing to do for the health of my babies, I cried more for the loss of that than for any of the other fears we were facing….

At 29 weeks I had another scan. I knew that things were starting to go pear shaped again but I was still hoping to hold out till 32 weeks. But the scann showed fluid levels on the rise around twin 1 yet again and possible changes in her brain, now was the time, they were better out than in.

The surgery itself was physically very easy on me. I was admitted the night before for more steroid injections to help mature the babies lungs and so had plenty of time to get my head around the fact that this was really going to happen. The hospital staff were all lovely and I talked it all through with our OB many times and knew exactly what was going to happen, when and how.

Once we got there I was talked through each stage. We all laughed when they made the initial incision in my uterus and because of the extra fluid, instead of their being a ‘gush’ of amniotic fluid there was a fountain. Amniotic fluid shot up in the air and covered everyone, dripped off the lights and and soaked us all. I got to watch as each of the babies were delivered – they didn’t waste any time because of the TTTS and they were delivered less than a minute apart.

I had primed myself to be ok if we didn’t hear the babies cry…. but both of them gave a small cry, the best sound I have ever heard. I got a quick look at each of them, my husband told me they were girls and then they were taken away to be worked on and then taken to NICU with their Dad in tow, while I was sewn up and sent to recovery.

I was back in my room within the hour, but I was alone. I almost felt like I’d just had some routine surgery rather than just had two babies. It was all very surreal. I felt very detached from the whole event. A while later Baldy Boy came back with photos that the NICUnurses had taken and a report that they were both doing ok, both needing some breathing support but all things considered doing well.

Physically I was doing ok too. I felt fine and badly wanted to get up and out of bed, and go down to see the babies. I had some issues with my IV line not flowing and them worrying about my fluid levels so I wasn’t allowed out of bed until the next morning… when I practically ran down the hall to the lift. Needing to see your babies for the first time is a really good motivator to get over a c-section, and fast!

I stayed in hospital for the full five nights, not because I was physically having any issues getting over the c-section – in fact it was the exact opposite – but because I wanted to be close to the girls and I needed help getting expressing happening. The day I finally did go home, I named them, because I couldn’t bare to leave them alone in the hospital un-named.

So then started the weeks of trips in and out to the hospital. The girls were in NICU for almost 6 weeks and then in special care for almost five weeks. I spent that time attached to the mean green milking machine or in at the hospital. They came home at just on 10 weeks old, a few days before their due date and on my birthday.

So that is the basic run down of how the girls were born… but I guess it only barely scratches the surface of how it affected all of us. At the time I didn’t stop to realise what was going on, probably I didn’t want to. It is only looking back that I can now see how much the way they were born, and the aftermath of that affected us all and how important that made Muski’s VBAC birth to me.

I don’t regret the way the girls were born. I don’t regret for a second having a c-section. Nor do I feel like I was badly treated by the hospital or our OB… in fact I feel the exact opposite. If it wasn’t for the expertise of our OB treating the TTTS and knowing exactly when out was better than in I doubt we’dhave both our girls today. The stats back then for severe TTTS were not good… we are incredibly lucky to have two happy healthy girls, so many people in our position are not that lucky. So I didn’t have the traumatic c-section birth that I know so many people have experienced, in fact the c-section part of it was the easy bit… but it still affected me in so many ways.

Home » How the girls came into the world…