Despite the fact that I have a degree in Early Childhood Education and years of experience working with children, when it comes to this parenting gig I still struggle with things, just like everyone else.

One of my biggest battles is with yelling.

I yell. I yell way too often. I loose it and I rant and rave and yell.

But then I realise what I am doing.

I suddenly see and hear this angry person spewing forth angry words on the people I love more than anything in the world. It scares me that I could ever feel like is ok, and it makes me sad.

When I blogged about not wanting to regret shouting I was surprised at how many people told me they felt the same way. It made me feel a little better to know that I was not alone, but it also made me think. I don’t have all the answers (not by a long shot) and I know this will challenge me (a lot!) but I’m going to work on ways to yell less… who’s with me? 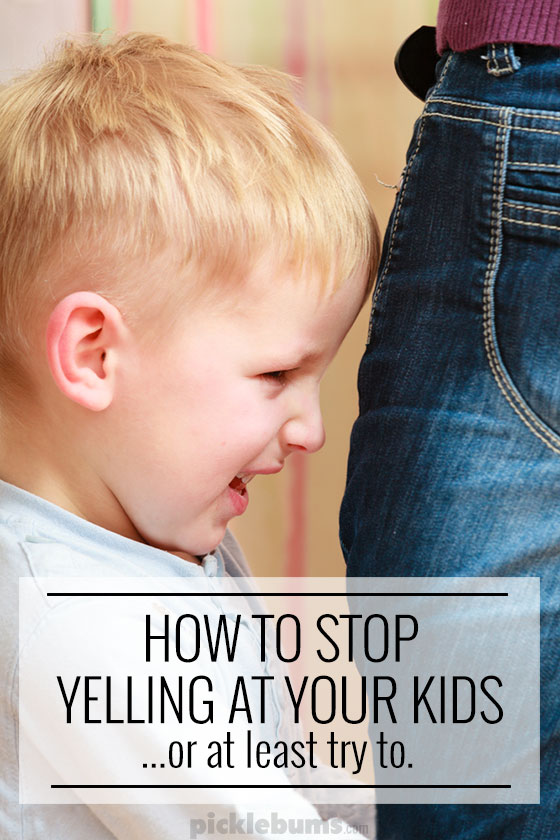 Before I Start Yelling…

It’s always easier to stop something before it begins don’t you think? And it’s easier to be successful at something if you set yourself up for that success. So I’ve been looking at how I can stop yelling before I am even angry. What can I do to change myself and the environment so that I don’t even get to the point of wanting to yell?

Find Your Triggers
After thinking about it for a while I realised that I often loose it and yell when I am frustrated by something other than my children. When I am feeling stretched by everything I have to do, when other things in my life are not going right, when I feel generally stressed and out of control, that is when the little things set me off into that downward spiral of yelling.

While the fact that I take my stress out on my kids was a hard truth to face, it is actually quite liberating in a way. This is something I can actively change. I can’t change the fact that four year olds whine and that seven year olds like to say “It’s not fair” a hundred times a day, but I can change how many things I put on my to do list. I can identify those things that stress me and work out ways to either let them go or deal with them better.

What are your yelling triggers?

A Positive First Response.
The idea is simple…. work out the types of situations that frustrate you and pre-plan a ‘positive first response’.

So now when someone says those fateful words, and I’m in that moment of wanting to yell I don’t have to think too hard to come up with a better response. I can just recite my little script… “Being fair doesn’t mean being equal. Everyone gets what they need when they need it, that is fair.” and hopefully not yell.

When I’m in the Moment…

When I am in the moment… right there… angry and frustrated and feeling unheard. What do I do then? How do I stop myself tipping over the edge and being the crazy shouting Mum?

Walk Away
It seems so obvious, just walk away, but oh boy it can be SO hard for me to do!

When I am on the verge of yelling I need to just take a breath and walk away. I don’t have to engage in whatever the problem is right then, that instant. It is ok for me to step away and come back when I have had a chance to think things through and find some rationality. If it really is a problem it will still be there when I come back to it, or perhaps it’s not such a big deal in the first place and giving the kids a chance to sort it out on their own is a fabulous thing.

Not only does taking a break give me a chance to calm down and not yell, it also shows my children that it is ok to walk away, it is ok not to fight, or to take a moment to yourself when you need it. I think that is an important lesson to teach.

Redirect Your Energy
When my kids lash out at someone or something I often tell them that it is ok to feel like hitting but it is not ok to hurt someone or break something and that they could instead hit a pillow or kick a ball to get that feeling out. I need to take my own advice.

After I’ve walked away I’m going to do some mundane physical activity. I’m going to redirect my frustrated energy into something like folding the washing, or cleaning the bedroom, or gardening. I need an activity that I can do without thinking too much, to give my brain a chance to slow down and think things through, and I need an activity that is physical enough to help get out some of that tension.

What would your mundane activity of choice be?

Make a Funny
Humour is something I’ve been using more and more of late. Doing something to make everyone laugh can really change the tone of the situation. When everything feels like it’s about to go to hell in a hand basket try telling a fart joke or singing a favourite song replacing the half of the words with ‘poo’.

“Baa Baa Poo Sheep, have you any poo?” Come on… who can yell when they are singing something like that??

It’s hard to stay angry when you are being silly and funny. It is hard to yell when you are busy telling a joke or acting the fool. Being funny can be enough to remind myself of the parent I want to be.

Apologise
Saying I’m sorry, and really meaning it, is important. I don’t need to go into details and tell my kids what a terrible mother I am, they don’t need to hear that. But they do need to hear that sometimes everyone makes mistakes, sometimes everyone gets angry and says or does things they don’t mean, and that is ok. Even when I’m angry I still love them and even when I’ve made a mistake they still love me.

Cut Yourself Some Slack!
I can beat myself up for days after I loose it. I easily fall into that cycle of self talk that goes something like… “I suck at this parenting gig, why on earth did I think having four children would be a good idea, they deserve better than me….” But you know, that is not going to help me be a better parent. I am not perfect, I will never be perfect. I make mistakes, and that is ok. Instead of being down on myself I’m just going to pick myself up, dust myself off and try to do better next time. After all… that is all we can do.

This is something I struggle with and I don’t have all the answers so I’d love to hear the things you do to try and avoid yelling at your kids.

How do you manage this?
Are there other blogs or articles that you find helpful ?

Home » How to Stop Yelling At your Kids… or at least try to.