There is nothing better than a bit of water play on a hot day, or even on a cold one.

Water play is one of those activities that offers opportunity for learning in all developmental areas. It’s soothing, engaging and just plain fun, yet sometimes it seems like too much work and too much mess, but it doesn’t have to be. Keeping it simple can make water play much more manageable.

At the end of last week it was hot and sunny. My smallest was also hot, and miserable with a bit of a temperature. It had been a long and cranky day and it was only half over. I needed something to both engage him and cool him down a little…. water!

Instead of setting up a tub which he (being only 18 months old) would immediately dump out all over the floor and himself (and enjoy every minute of it), I decided to keep it really simple…. 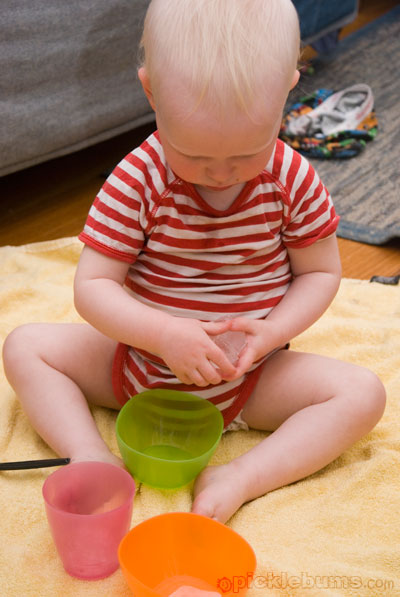 Spreading out a towel on the floor I sat him in the middle and gave him a couple of cups, a small bowl and some spoons. Into each bowl and cup I put an ice block. That’s it.

When they had melted I gave him a few more. 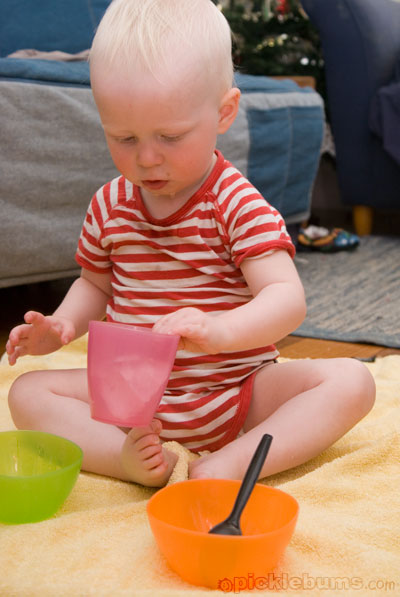 When he was done there was a few small wet patches on the floor where he’d strayed off the towel, and the towel was damp in spots, so I used it to wipe up the floor and clean up was done. He was wet down his front as I’d left his top on, but if he’d have been only in a nappy I could have towelled him off also!

Not only did it cool him down a little, he had lots of fun and learnt lots as well, and my sanity wasn’t stretched even further by this KISS water play idea.

Do you play with water at your house?

Joining in with It’s Play Time at Let The Children Play, and The Play Academy at Nurture Store.