I’m standing in the middle of the shopping centre, holding a squirming 6 month old baby while my toddler twins try to crawl up my legs and hide under my shirt. Both girls are crying, shaking their heads, and desperately trying to get away.

I stagger backwards, away from the source of their fear, but it keeps on advancing. People all around us stop and stare, strangers offer unhelpful words, I try to reassure them, I look for a way out, but still it keeps coming, hands outstretched, loud voice booming….

What were my three year old twins so afraid of?

From around the age of two my twins developed a strong fear and dislike of Santa.

At three years of age they could spot the jolly man a mile off. If they saw a picture of Santa they would say over and over ‘I don’t like Santa… I don’t like Santa’. No Santa ornaments were allowed on our Christmas tree.

Going to the shops became a nightmare, as everywhere we went there were life sized blow up Santa’s, Santa’s that moved and sang as you walked past, and worst off all, the real life Santas out and about, ho-ho-ho-ing and handing out gifts.

Not even a bag of lollies or a present could entice my girls to even look at Santa, let alone get near enough to receive a gift. There was no way on earth they were going near that over dressed man with his big white beard, not for all the lollies in the world. They really, really, didn’t like Santa.

Initially I was a bit disappointed that the ‘magic of Christmas’ wasn’t so magical, but when I stopped to think about it I could definitely understand how Santa could be scary to a child…

He’s a stranger. He’s everywhere. He wears odd clothes (especially when it is the middle of summer like it is for us at Christmas time). He keeps a list of all the things you’ve done wrong. He comes into your house at night, even if all the doors are locked.

I could understand why they were scared of Santa.

My girls were shy and struggled with many situations that involved strangers, so why should Santa be any different? But one big difference between being scared of strangers in general and being scared of Santa is that everyone expects you to be fine with Santa, and many people don’t accept no thank you for an answer.

If I had a dollar for every person who tried to bribe my kids to talk to Santa with lollies, or who told them they wouldn’t get any presents if they didn’t talk to Santa, or who simply invaded their personal space all in the name of Santa… well, lets just say my kids wouldn’t be needing Santa to give them presents!

I know people mean well, and I know it can be hard to let go of some long held traditions, but our job as parents is to support our kids, and to keep them safe, that job doesn’t stop at Christmas. 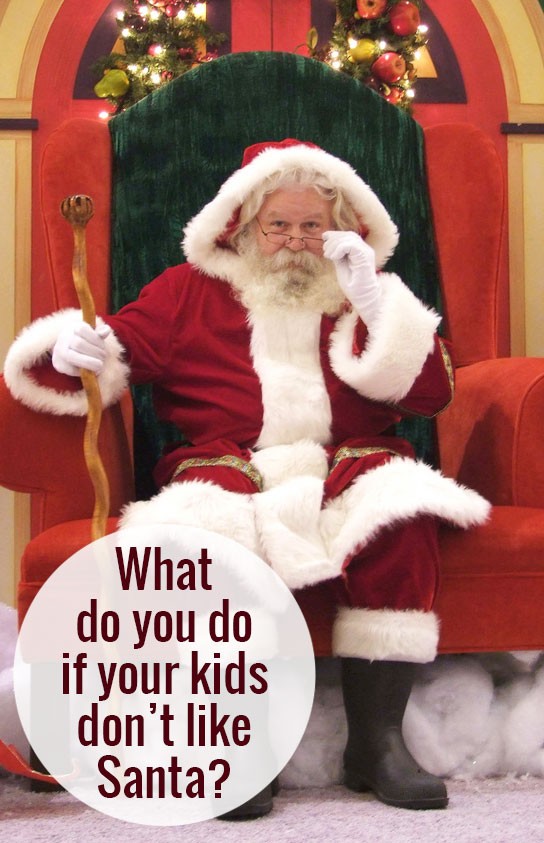 What to do when your kids don’t like Santa.

Accept and Acknowledge their Fears.
It may seem silly to you, or overly dramatic, or even disappointing, but belittling or brushing off your kids concerns over Santa doesn’t help. Try your best to understand your child’s fears and accept them. Talking about it can help you both. If your child is old enough, ask them what they are afraid off. If they are younger talk about all the reasons Santa might be scary and how you will always keep them safe, and all the reasons Santa is kind and good.

Be your Child’s Advocate.
I know people mean well with the whole Santa caper, but stand up for your child and don’t let others, however well meaning, make your child feel uncomfortable or upset. I often found myself saying in a loud voice ‘it’s ok, Santa understands that you are afraid and will NOT come any closer’ or other similar phrase to let everyone within earshot know what was going on and that I wouldn’t let my child be pushed into doing something they were afraid of.

Do Some Background Work.
If Santa is an important part of your celebrations then do some background work leading up to the season. Share Santa in some non-threatening ways that will allow your kids to explore their ideas of Santa – Read some funny books about Santa, use some Santa figurines in an imaginative play set up, sing some songs, or get a Santa soft toy to play with. Let your child get used to the idea of Santa and explore their fears in their own time, when they feel comfortable.

Start Small.
Your child may never feel comfortable to sit on Santa’s lap for a photo, or have a chat about what they want for Christmas, and that’s ok, but you may be able to help your child make some small acknowledgements of their fear and move towards feeling better about Santa. A wave from a safe distance is a good place to start. Perhaps your child could hand over a letter to Santa if they are afraid to talk to him. Don’t push or belittle your frightened child, and please don’t use Santa as a threat, all these things will make the fears worse not better.

It Doesn’t Have to Be all about Santa.
I know that a photo with Santa is a tradition many families love and want to continue, the same goes for going up to see Santa at Christmas parties, but does your frightened child really have to do these things? Are there other ways you can share the magic of Christmas? A photo under the Christmas tree (or eating Christmas cookies – see below) would be loved just as much by grandparents, and there are many magical Christmas traditions that don’t involve Santa. 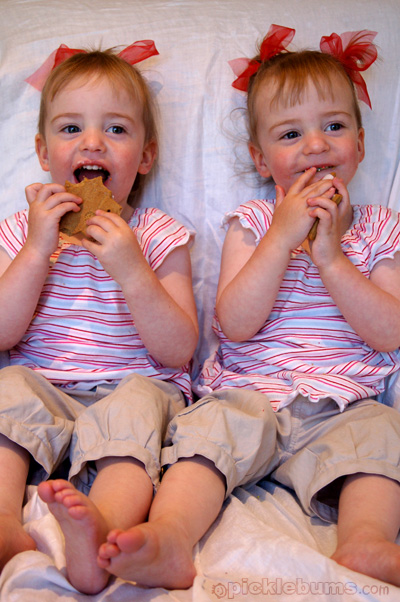 As my girls grew up they decided that Santa was ok, as long as he didn’t come too close to them. They came up with the idea that Santa was allowed to land his sleigh out in the paddock, not too close to our house, and send some of his Christmas angels into the house with their gifts.

Even as they grew up, and even when they asked the question and knew the story of Santa, they still talked about not liking him! They do however love the magic of Christmas and love being part of bringing that magic to their brothers and their family.

Do your kids love or loathe Santa?

{Santa image adapted from this one by LadyDragonflyCC – >;< via flickr }

Home » What do you do when your kids don’t like Santa?