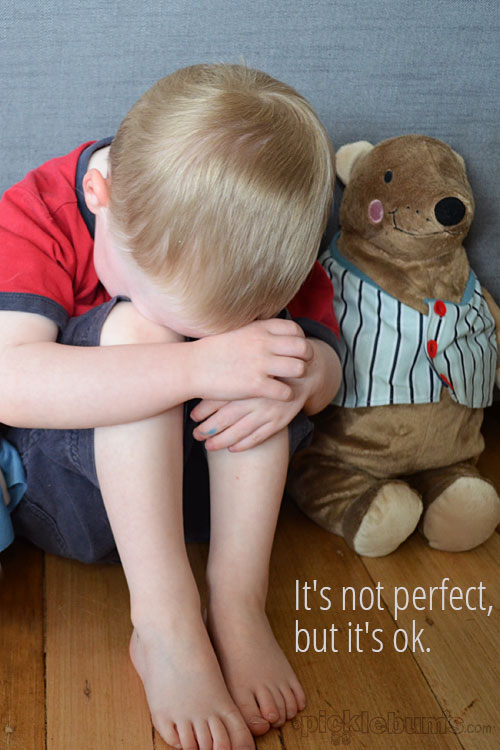 I stand at the bench making dinner and listen to him cry.

He is wailing about the injustice of being three and a half.

He is angry, because he is not allowed to go out and ride his bike on the road with the big kids. He is cross, because I have to make dinner, I can’t go out to ride, and if I can’t go, he can’t go.

He is frustrated… but I’m not.

In the past, this kind of tantrum, at this point in the day, after a day full of impossible three and a half year old tantrums, would have sent me over the edge, but not today.

I put the first of the pizza pockets in the oven and wander down the hall to scoop him up. I rest my chin on his little blond head.

“It’s not fair!” he sobs into my chest, and today that phrase doesn’t even drive me insane like it usually does.

“It’s really not” I tell him, as I realise that today I am not trying to fix things. I don’t feel the burden of having to find a way to make everything ok, all the time.

I am not sure when I discovered the zen of this late afternoon tantrum, but it feels like a weight has been lifted from my shoulders, and even though he still cries as I return to the pizzas, I know it’s all ok.

In the big scheme of things, it’s ok.
Even in this moment, even with the tears, it’s ok.

It’s not perfect… but it’s ok.

What have you learned from your parenting struggles recently?

Home » Lessons I Learned from a Late Afternoon Tantrum