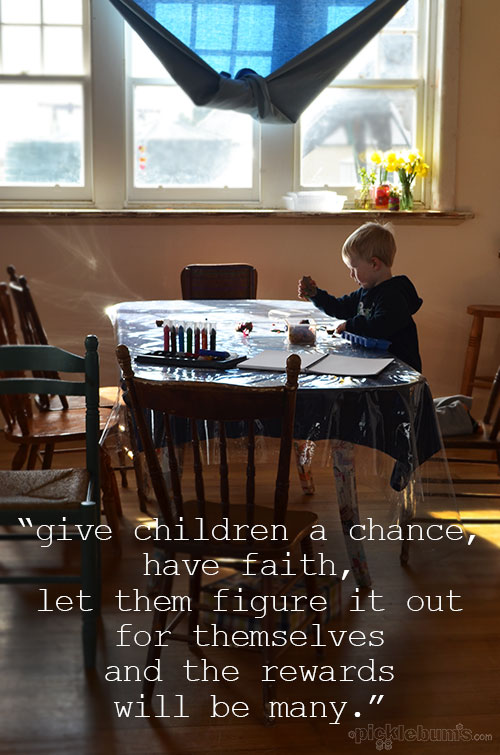 “I want to play a puzzle” he announced.

“Ok” I said… “but pack up the playdough first.”

He rolled his eyes and huffed and puffed (he might be only three but he has learned well from his older siblings) but he went off and began to put the playdough back into the box.

I watched him through the door way as he tried to get the playdough he had crammed into the ice block tray out again.

“Oh!” he said as he saw that it was still stuffed full of play dough.

He bashed it harder… still no luck.

He bashed it a few more times then gave up, chucking it down on the table with a sigh.

I thought he was going to get upset, or just walk away and leave it as he climbed down from the chair and left the table. I was about to tell him to go back and pack up when I heard him open the kitchen drawer. Now I was sure he was up to no good. The assumption was not totally unfair since just yesterday I had discovered him and the floor covered in yogurt after a kitchen adventure got out of hand, but something made me stop and listen a bit longer.

I heard the drawer slam shut and footsteps heading back to the table. I saw him climb back onto the chair and then he produced a spoon and proceeded to use the spoon to dig the playdough out of the ice block tray and put it away. I watched him grunt and groan and work hard, and I heard a little “yay!” when it was all done.

I smiled as I watched him… left to his own devices, without me jumping to conclusions and stepping in, he had figure out his own way of dealing with his problem.

He beamed as he brought me the container of play dough
“I’m done Mum!…. can I have a puzzle now?”

“Sure” I said and as he wandered off I thought of how much this little moment had taught us both.

Noah learned that he can solve his own problems. He can come up with solutions and try them out. He is capable, smart and strong.

I learned to be patient and not to assume. I learned to give my children a chance, have faith, let them figure it out for themselves and the rewards will be many.