Parenting secret #37 – It’s ok for your kids not to like the limit you set.

So you’ve set a limit, you’ve remained calm, you’ve explained in a clear and concise manner, and you are standing firm… and then your child loses it.

They yell, and scream, and say you are the worst parent ever (see Parenting Secret #21 – It’s Not Personal). There are tears, and pleading, anger, and frustration. There is eye rolling, and foot stamping, and perhaps even some lying on the floor. 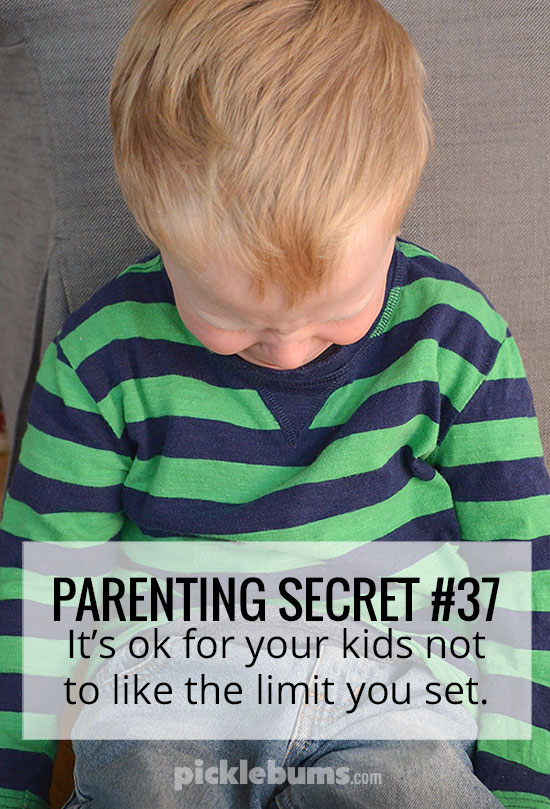 It’s ok for your kids not to like the limit you set.

It’s ok for your kids not to like the limit you set.

You don’t have to fix it. It is not a sign that you have done something wrong.

Allow them to feel angry, don’t squash it or brush it under the carpet. Let them be angry. You would feel frustrated if someone told you you couldn’t do something you really wanted to do wouldn’t you? It’s reasonable for them to be angry.

But you stand firm, because it is ok for your kids not to like the limit you set.

But if the decision is made and the limit is set, stand firm. Be the rock that they can push against so they truly know where those boundaries are and that you are keeping them safe and healthy, even they don’t think they need you to, even when they are angry, even when they really, really, don’t like it.

If you set a limit with love, understanding, and with the aim to teach instead of punish… it truly is ok for them not to like it, I promise!

PS – I don’t really know 37 parenting secrets… I just made up that number (along with secret #21) to make it sound good!

Though I wonder if we could come up with 35 other little known parenting tips.

Have you got any parenting secrets to add to the list?