I heard his brother screech at him and I knew this was not going to end well.

I came in just in time to see his arm sweep across the table and his brother’s construction crash into a pile of tiny pieces on the floor.

My first reaction was to yell, and I confess, that’s what I did. (I’m working on yelling less, but often my brain takes time to catch up to my mouth ) But then I managed to catch myself long enough to stop and take a breath.

I had two choices. I could go back to yelling, throw in a lecture for good measure, and send the 9 year old to his room. Or I could respond with compassion, find out what was really going on, and hopefully not be the one left to pick up all the Legos. I went with option 2. 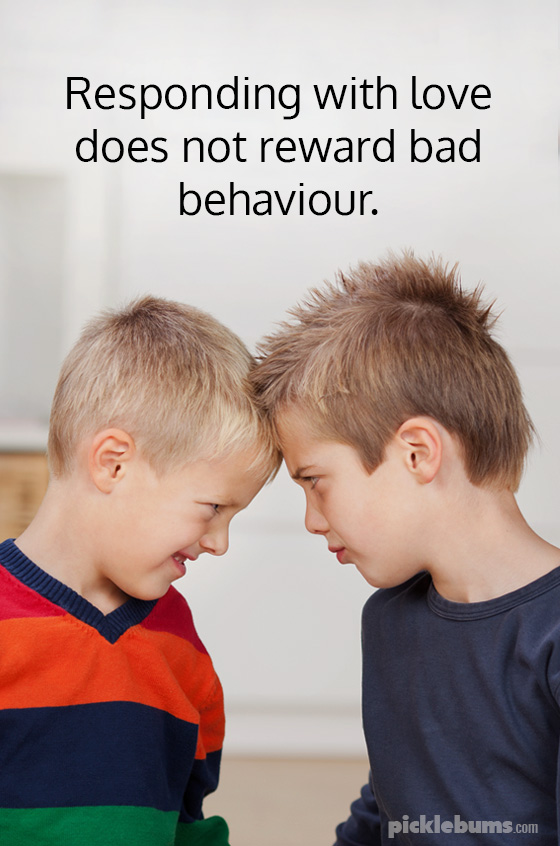 After empathising with the little one I turned to his big brother and asked “Are you ok?”

“I didn’t mean to break it” he said defiantly.
I had to swallow the impulse to yell again. Of course he meant to break it, I saw him deliberately swipe it off the table!

After some more calming breathes I asked him again, “Are you ok?” and this time I was met with crumpled shoulders and eyes filled with tears.

As I hugged him I empathised, after all, I knew what it was like to do something you regretted when you were angry. Hadn’t I just yelled at him when I had promised myself I wouldn’t do that any more?

“You really upset your brother” I told him “I know you’d be devastated if one of your Lego things got broken.”

“You need to pick up these Legos and maybe help him rebuild his spaceship if you have calmed down enough, or find some other way to show him you are sorry”

In a perfect world my big boy would have picked up the Legos and helped rebuild the spaceship, but my world is far from perfect. Instead he refused to help pick up, threw a surly ‘sorry’ towards his brother, and kicked a lump of Lego across the floor.

I was so close to yelling again, but those calming breathes work wonders, and somehow I kept it together.

I told him I thought he still seemed angry. I told him that I understood that sometimes those feelings are overwhelming and take a while to get on top of. I reminded him that it wasn’t ok to smash other people’s Lego constructions but that it was ok to make a mistake. I suggested that he might be able to start over in a little while when things weren’t so huge, and crazy, and that if he wanted some help I’d be there.

Then I went back to making dinner, wondering if I had done the right thing. After all my big boy had done something wrong, then refused to make it right, and I let him get away with it. Or had I?

Often we are told that giving our children love, attention, connection, or compassion when they do something wrong will reward bad behaviour. At best we are told to ignore the behaviour, at worst, we are told to punish it, anything else will just just ‘encourage it’. But that’s not true.

Love does not reward bad behaviour.

Responding to a child with compassion, and understanding is not ‘letting them get away with it’, it is meeting their basic human need to feel loved and understood. A need that is especially important when we are overwhelmed, struggling, or have made a mistake.

If you allow the behaviour to continue, then perhaps you are ‘letting them get away with it’, but you can guide children to more appropriate behaviour without withdrawing love and attention, without making them feel worse than they already do. 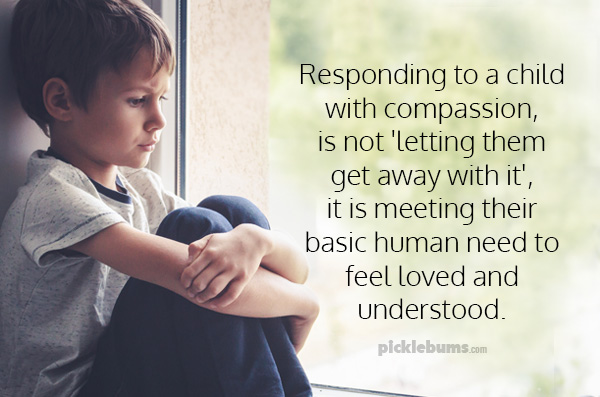 I’d like to tell that this story ends with my big boy picking up the Lego, happily helping is brother rebuild the spaceship and being truly sorry for what went down… but that’s not what happened.

He did pick up the Lego, but he was still furious while he did it. He said sorry to his brother, but it was a curt apology with an angry undercurrent. And it was me who helped my 6 year old rebuild the spaceship.

You might be thinking that that proves all the stuff I was saying before to be wrong. That being kind and loving did reinforce the bad behaviour. But I think it just shows that this stuff is hard, and that there is no one perfect solution. On this occasion it took my boy a lot longer to manage his anger than I had hoped, but that happens to all of us sometimes.

A more gentle, connected approach to guiding children’s behaviour doesn’t always have a perfect outcome, but being compassionate, and trying to connect with my boy first, didn’t stop me from reinforcing limits and guiding him to more appropriate behaviour.

Responding with love didn’t let my child ‘get away with’ something, it allowed me to teach him without breaking our connection.

Home » Responding with Love Does not Reward Bad Behaviour.