You might call it ‘tattling’ or telling tales, but here in Australia, we call it ‘dobbing’. Unfortunately it’s not seen as a very positive thing and often parents want to know how they can stop their kids from doing it.

There are lots of things you can do to discourage ‘dobbing’ if it has become a negative or nasty thing, but there is one thing you might be missing about tattling, something that might turn the whole station around. 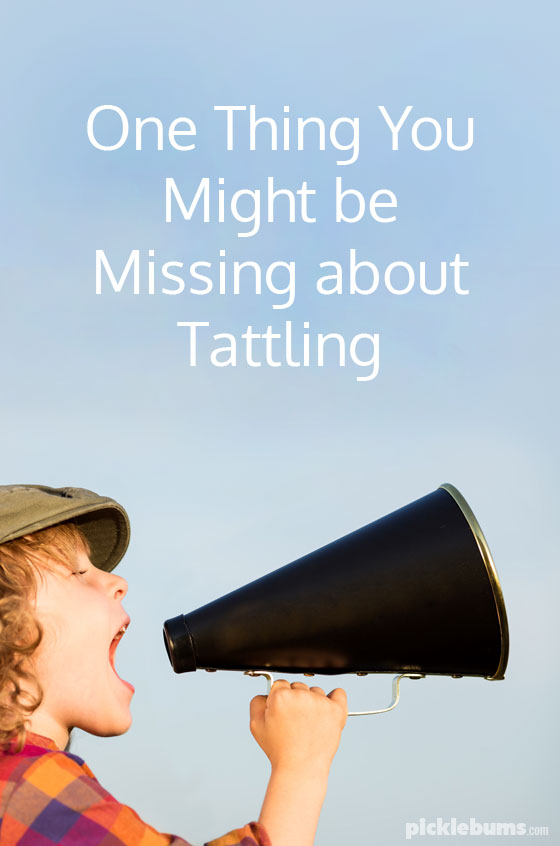 Often kids tell tales not because they want to get the other child in trouble, but because they are trying to work out what is and isn’t ok.

This is especially true of preschool aged kids who are still working out what the rules are, how they work, and how social interactions work.

So when four year old Noah comes over and says “Morgan said a bad word! Morgan said ‘bum!’ ” he’s not asking because he wants Morgan to get into trouble, he’s actually checking on the rules.

Noah is pretty sure that you are not supposed to say ‘bum’. But Morgan said it, and Morgan laughed about it so maybe it is ok to say bum? So while he’s fairly sure he’s right, and that Morgan saying ‘bum’ is wrong, he really needs to make sure, so he comes to tell me about it.

He’s not being mean, or nasty, in fact he’s not even really ‘tattling’, he’s just checking on the rules.

If I fob him off by telling him not to be a dobber/tattle tail then he will be confused and frustrated.
But if I simply say “Bum is not a nice word to say.” usually he’ll nod his head and be on his way. He’s had his understanding of the rules validated, he knows where he stands now.

Even if he’s not coming to tell me about what Morgan did to double check his understanding of the rules, even if he is doing it to get Morgan in trouble, that kind of response still works well.

Telling kids not to be ‘tattle tails’ or banning telling all together discourages our kids from communicating with us, and it doesn’t help them learn how to handle these situations. So the next time your child ‘dobs’ think about why they might be telling you, maybe they just need to check on their understanding of the rules.

How do you manage tattling or ‘dobbing’ at your house?

For some more ideas on how to mananage tattling check out these great articles:

Home » One Thing You Might be Missing about Tattling