When the opportunity to do a sponsored post for Meat and Livestock Australia came up I was initially hesitant. I don’t want my blog to become one big advertorial, so I am picky about what campaigns I accept and which I pass on. But recent events have made this opportunity to talk about meat in a young child’s diet a timely one for me…

Last month I wrote a guest post for Childhood101 about starting our youngest child on solids and what works for our family. That post sparked an interesting discussion about fortified rice cereal as a ‘first food’ and the need for iron in a baby’s diet.

Some people are surprised to hear that Noey has not had rice cereal. Our other children had iron fortified rice cereal, but not Noah.

The girls, being prem, had ongoing issues with iron deficiency, they also had chronic reflux and ‘failure to thrive’ so a bland, low allergen first food enriched with iron was common sense for them.

We also started Morgan on it, but soon realised that wasn’t such a good idea for him. His system couldn’t cope with the cereal and he became terribly constipated and unhappy.

This time around I did some reading and decided that fortified rice cereal wasn’t the right thing for Noey.

But what about his need for iron?

We are often advised that at around 6 months of age a baby’s needs for iron and zinc may not be fully met by milk feeding alone, which is why commercial rice cereal is usually fortified with iron (and other vitamins and minerals). However, new research shows that this is not necessarily true for breastfeed babies. Kelly Mom explains the various research well and says – “The original iron stores of a full-term healthy baby, combined with the better-absorbed iron in breastmilk, are usually enough to keep baby’s hemoglobin levels within the normal range well into the second six months.”

The Paediatric News reported in 2009 that rice cereals are bland in flavour, low in protein, high in carbohydrates and the iron in them is poorly absorbed making them not exactly the most nutritious or delicious first food. The new research suggests that there is no reason not to introduce meat as a first food.

This information reinforces my instincts that Noah (who has been exclusively breastfed) does not need added, synthetic, iron supplements in this food. It also fits with our goal for our family to eat ‘real’ food, rather than overly processed items. I want the majority of our food to be made from scratch with ingredients that I recognise, rather than coming from a packet with a label full of numbers. So we skipped the cereal and have been giving Noey small amounts of red meat along with other meat, fruits, vegetables (those high in iron and those that are not!) and grains as part of an interesting, varied, balanced diet.

Noey loves to chew and suck on the bone of a lamb cutlet. We give him strips of steak as finger food or in his ‘chewy bag’. When we have meals with a suitable meat component, such as lamb burgers, or meatloaf he gets some of the cooked minced meat fork mashed into some potato or other vegetable that we are eating.

This pdf brochure from Meat and Livestock Australia has some great recipes and practical ideas on how to adapt family meals for all ages. We tired the burgers the other day and everyone loved them, including Noah. My big kids are eyeing off the Beef and vegie skewers, because if you put food on a stick it immediately tastes better, and I’m sure Noey will be just as keen! 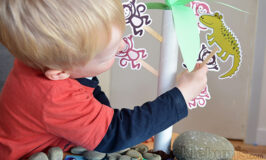