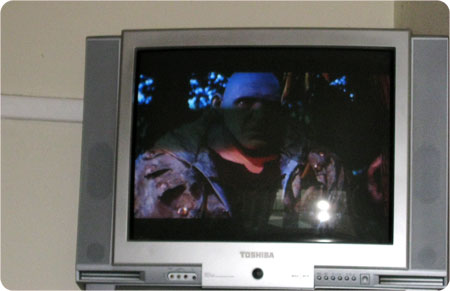 For a long time I’ve held the view that TV is not great for kids. I still hold that view, but lately I’ve been reassessing how TV works in our family.

The nick name ‘idiot box’ well describes how I feel TV and kids generally get along. You plonk a child in front of the TV and all you’ll get is a stagnant, vacant, dumbed down version of what was once an active, bright, spunky individual. There are so many other, better things, kids could be doing, rather than vegging out in front of the TV.

I asked this question of my facebook friends and got some fabulous, thought provoking, replies which really helped me pin down my own thoughts on the subject.

In many ways I think TV is bad for everyone, big, small, or somewhere in between. The mindless, zombie that often (but not always) occurs in front of the TV is not a positive thing for adults or children. All of us would probably be better off reading a book, or going outside, or chatting with a friend. Television can also be oddly addictive, and terribly anti social. Of course it is an individual thing, some people (children included) seem more easily engrossed in television, whereas others can take it or leave it. However, a big difference between adults and children when it comes to watching television, is that adults are better equipped to make sense of what they are seeing and better able to self regulate what they watch and how much they watch.

So where does that leave me and TV?

Of late there has been an awful lot of TV watching creeping into our lives. The Middle Child has been requesting to watch a DVD the second we get in the door from dropping the girls at school, and with a small baby and a To Do List a mile long I’ve been letting him. He is much more prone to zombie TV watching than his sisters are and will happily lie on the couch and watch for long stretches of time, without saying a word to anyone. Now while that means I get a lot done without a little helper in tow, I don’t like it.

The girls too have been watching more TV than usual, sometimes coming home from school and watching ABC 2 until I drag them away and make them wash or eat. It doesn’t feel right to me, and I’ve been feeling guilty about it.

I’ve been pondering whether I should just ban the television all together. But surely that makes me, a person who has a TV in her bedroom, who enjoys an hour or so of TV each night to help my brain stop buzzing and worrying and whirring…. surely banning my children from watching TV makes me somewhat of a hypocrite?

And then suddenly the light bulb went on.

I use TV as a tool… I control the television, I use it to my advantage, why can’t I also do that for my children? They enjoy watching TV to wind down and veg out just as I do, and I am ok with that, in small amounts, and at certain times of the day, and in fact, that could work for all of us.

So now my children are able to watch an hour or so of television before dinner. It’s that frantic time of day when I am trying to get dinner finished and tidy up and get everyone washed and ready to eat. It’s the time of day when we are all tired and narky, fights break out at the drop of a hat and I yell way way too much. It’s a time of day when I think a little vegging out in front of the TV isn’t such a bad thing. It’s a time when TV can work for us in a positive way rather than a negative way.

They don’t always watch TV, sometimes they are too busy doing other things, but they know that they can, at that time of day, if they want to. I still regulate what they watch, and I’m still around while they watch it, but I am done feeling guilty about them watching TV because I’m making it work for us, not against us….. well hopefully!

How does TV work in your house?
Do you think TV is good, bad, or somewhere in between?

Home » The Idiot Box and Us.