Around about this time three years ago I was home from hospital, but my girls were not. We had held them once, when they were 8 days old. We had watched them in their plastic boxes struggle to breathe, covered in tubes and wires and machines and alarms that go off when they forget to breathe.

I spent almost every waking hour either attached to the ‘mean green milking machine’ or at the hospital. I hated every family who walked out of hospital with their baby in their arms. I hated every mother who held her baby whenever she wanted to. I hated Christmas. I hated New Years. I felt like my babies would never come out of their plastic boxes let alone ever come home. But they did.

They came home on my birthday. I barely remember the first 6 months they were home. It was a fog of screaming, vomiting, tiny babies that I hardly believed belonged to me. The only connection that made them different from any other baby I had babysat or looked after in child care was that I breastfed them, but that was fast turning into a disaster and the fear of loosing that connection nearly drove me nuts.

The fog cleared a little at the end of that first year. Finally the reflux was under some kind of control. The breastfeeding was still a disaster but I wasn’t going to give up that easily. And most importantly we went to playgroup for the first time. By the time they were one there seemed to be almost as many good days as bad.

The second year was crazy. Their first Christmas at home, and they were crawling. We sold our house and moved in with my parents. Zoe learnt to walk and Izzy was bullied into it, to stop her sister sitting on her and riding her like a horsey. The girls got busy and I got busy being busy with them. We finally bought a new house and moved ‘to the country’. Life suddenly settled. We had an amazing house in a cool place and lots of plans. I had made some amazing friends at playgroup who saved my sanity again and again. The girls were growing and chatting and playing together and by their next Christmas I could almost see the benefits of having twins.

This last year the benefits of having two have really started to shine through. Through the hair-pulling arguments and the bite marks. The eggs cracked on the couch and the vegemite finger painting. Despite the constant cries of ‘I’m hungry’ and the million puddles on the floor. Despite still battling reflux, and now asthma and allergies. Despite their paranoid fears and super sensitive hearing. Even though they are never quiet and they drive me insane. Despite all of that our girls are amazing.

They love each other as much as they hate each other. They are inseparable. They have a continuous supply of imaginative games to play together. They chat non stop, and laugh hysterically at jokes no one else understands. The make up songs together and sing at the top of lungs. They get each other in trouble and cover up for each other just as often. They love to paint and dress-up and dance. They love to swing and dig in the sandpit. They are very much alike in every way. They are so incredibly different in every way. 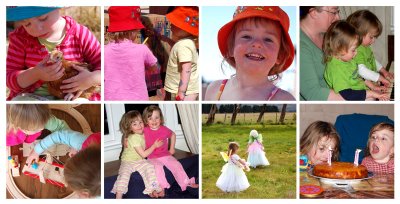 Zoe and Isabella were born on November 13th 2003 at 29 weeks and 2 days gestation due to severe, rapid onset Twin to Twin Transfusion Syndrome. They weighed 1316 grams and 960 grams, they spent almost 10 weeks in hospital and came home just before their due date on Jan 20th 2004. According to all the stats we should have lost one if not both girls. To know my girls today you would never know how fragile they were in the beginning. They are vibrant, crazy happy girls.

Being this lucky is something that happens to other people not me.