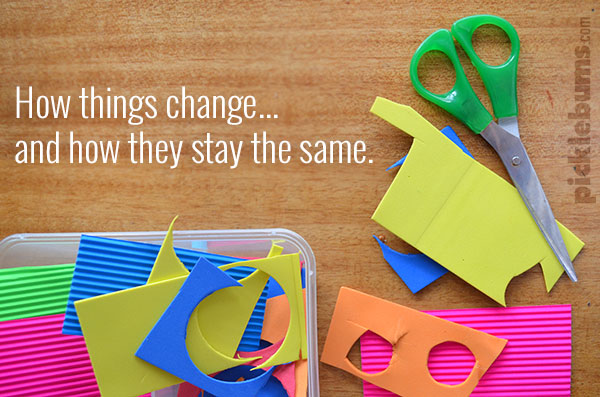 Once, not so long ago, there was a little boy.

The little boy spent a lovely afternoon building with blocks, mucking around with the peg board geoboard, and cutting and gluing, but something had gone wrong.

When it came time to pick up his brother and sisters from school, the little boy’s Mum discovered that he had cut more than just scraps of paper that afternoon.

He had cut a big chunk from the bottom of his shirt.

The little boy’s Mum was not very pleased, and neither was the little boy.
He was full of regret and cried and cried.

His Mum decided that all the tears meant he had learned a hard lesson and wouldn’t let the scissors run off and cut anything other than paper again, so she left it at that.

But later that afternoon, after the little boy had been angry with the rain for ruining his plans at the park, the scissors just happened to cut some more clothing.

This time they cut lots of big, ragged holes in his pants and they cut the toes out of his socks.

The little boy’s Mum was not very pleased, and neither was the little boy.
He was full of even more regret and cried and cried.

His Mum told him he would not be allowed to use the scissors for a while and she collected them up and put them in a container on her desk.

That night the little boy’s Mum was telling the story of the wayward scissors over dinner, and he cried again.

The whole family stopped to hear what the big sister would say next.
Were the scissors really to blame for all the wayward cutting?

“It’s not your fault, it’s just that you are like me.
Mum always says you remind her of me, she even thinks you look like me, and we all thought she was crazy, but she’s not.
You really are like me, because when I was little the scissors used to run off and cut things too… mostly my hair.”

And she was right.

The whole family remembers the many stories about the little girl and the wayward scissors.

And the little boy’s Mum remembers a particularly hard day, when the big sister had cut her hair yet again, when harsh words were said, when many tears of regret fell… she remembers telling the big sister that she would love her, no matter what… even if she cut her hair, again.

The next day the little boy looked longingly at the container of scissors, but he said nothing.

The next day the little boy looked longingly at the container of scissors, then he threw his arms around his mum and said;

“Please mum, I love you, I just need the scissors to cut one small piece of tape, and I love you, and I promise I won’t cut anything but the tape, and I really, really, REALLY love you …forever.”

His Mum wondered for a moment at how things change and how they stay the same, then she gave him the scissors and off he went.

Has there ever been some wayward scissors at your house?

Home » The Little Boy and the Wayward Scisscors