The girls are at school and the big boy is at kinder, that just leaves the smallest at home.

I am used to him having the big kids to entertain him!

Sometimes Noey and I are a little lost on the days like today, when Morgan is at kinder, and we have no errands to run. So I’m making a list of toddler activities… a list of things to do when you are almost two! 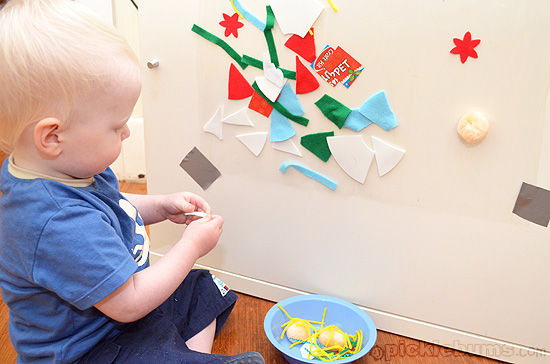 There are lots of variations of this activity, but we just stick a big piece of self adhesive paper, sticky side out, onto a low cupboard and collect a container of collage bits. Noey has lots of fun sticking bits on and peeling them off!

Drawing
Noey is only just beginning to be interested in making marks on paper, so a big piece of paper taped to the table and some crayons are the best art activity for him right now.

Play Dough
With a big brother who adores play dough has had a lot of experience with this activity, and since he isn’t one to put things in his mouth it’s lots of fun. While the big kids like every play dough accessory under the sun, for toddlers less is more. Noey likes a plastic knife and some containers to put the dough in, and take it out, and put it in and take it out…

Loose Parts
The big kids love to use loose parts to create things and in imaginative play, but Noey just likes the bits. He likes to put them in baskets and bags, tip them from one container to another, line them up, and generally just muck around with them. 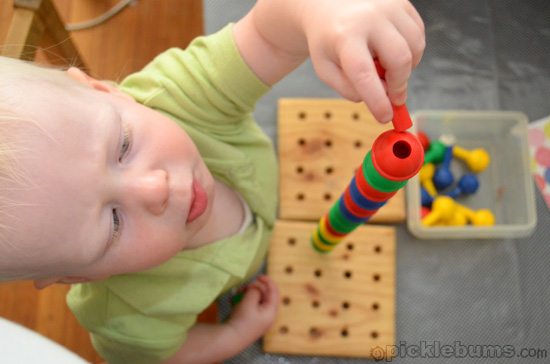 Whether it’s blocks or stacking pegs, Noey likes to build tall towers… then knock them down!

Pegs
A recycled plastic container with some clothes pegs will keep Noey happy for ages, and is great for fine motor development.

Cars
We have lots of cars, and one of Noey’s favourite activities is to shoot them down a long cardboard tube and watch them race out the other end!

Pretend Play
Simple dress ups like hats and bags are lots of fun, and Noey loves to put things in and take them out of our toy oven, or pretend to be cooking with a bowl and a wooden spoon.

Cooking
I also let Noey help with real cooking. Ok so he mostly just stands on a step and watches, but he can also stir things as well as get small items out of the fridge or cupboard for me. He can be surprisingly helpful for a 21 month old!

Water Play.
It’s not as messy as it sounds if you only give them a tiny amount of water. Noah stands on a step and ‘washes the dishes’ in the sink with about of centimeter of soapy water in it. He also loves to play with ice blocks. 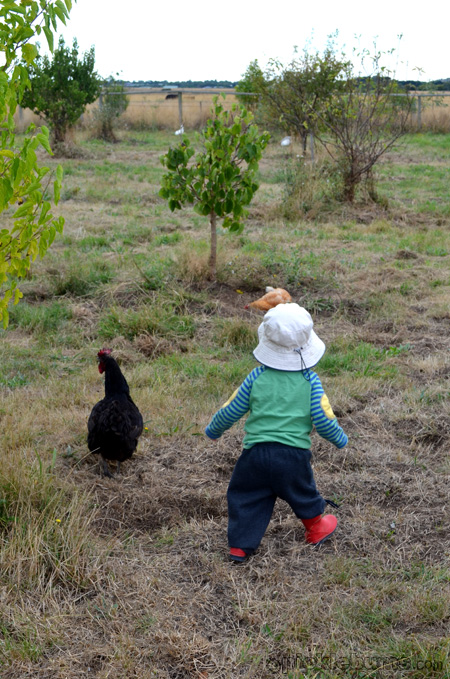 Noey’s favourite outside thing is to go talk to the chooks. But he also loves chasing bubbles, swinging on the swing, clinbing and balancing on our tree stump stepping stones and just running around. Even when I don’t feel like going outside, just 15 minutes outside can improve both of our moods! If we can’t get outside something active inside like crawling through our box tunnel is fun too.

What is your favourite toddler activity?

Home » What To Do When You’re Almost Two.