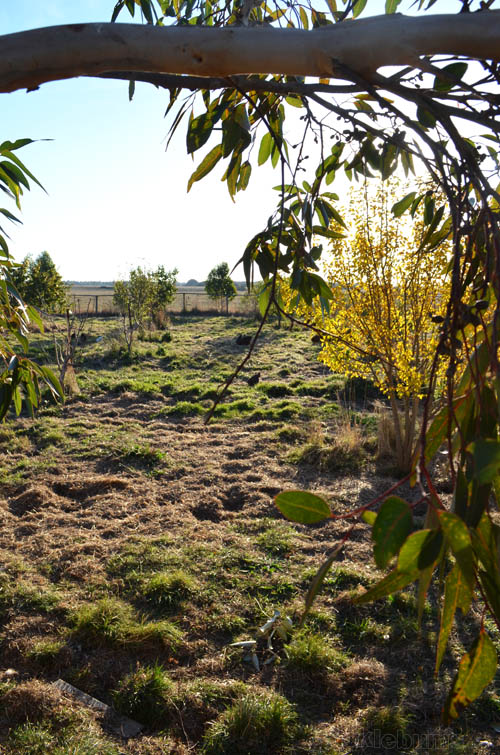 As I look out the window I can see my three big kids mucking about outside.

Izzy is up a tree, Zoe is dancing around without shoes on, and Morgan has a long stick in each hand, waiving them around madly.

I want to fling open the window and tell Izzy to be careful. I want to remind Zoe to put her shoes on (we have a boots on outside rule due to snakes in the warmer months). I want screech at Morgan to put the sticks down before someone gets hurt… but I don’t.

I squash the urges because, for a fleeting moment, I see my childhood reflected in theirs.

I remember hours spent in the back yard making precarious cubby houses out of dangerous objects. I remember digging in the dirt and picking my Mum’s prized plants to make potions. I remember doing things I knew I really shouldn’t be doing. I remember the joy and freedom of just mucking about.

As I sit here watching my own kids, I wonder if my mother knew about some of the not so great things I got up to, and let them slide. I wonder if she looked out her window and decided not to intervene, to just let me play.

Then Zoe dances too close and Morgan accidentally whacks her with a stick. I see her stop and say something with a cross face and I resign myself to getting up and dealing with the argument and tears that are sure to follow.

But it doesn’t happen.

I see Morgan throw his arms around his sister, he is obviously saying sorry. I see Zoe hug him back, despite the fact that she is obviously still cross. Then she points and I assume she is telling him to stick twirl somewhere he is less likely to hit anyone. They go back to what they were doing, but this time a lot further apart. They worked it out, on their own.

Zoe still has no shoes on, and I debate internally whether I should remind her of the rule. But it is a cold day, the grass is short, the likelihood of a snake being anywhere in her immediate area is pretty slim. So I ignore the fact that my mind is filling with images of an evil black snake sinking it’s fangs into my precious child’s unprotected foot, and I look away. I let them be for a little while longer.

I hear a lot about ‘helicopter parenting’ and now ‘lawnmower parents’ (who always smooth the way for their children) and I know I don’t want to be that kind of Mum. I do think there are times when hovering is totally warranted, even needed – even my five year old still needs me within ear shot at the park to help him deal appropriately with tricky social situations, and my two year old needs me even closer – but at home, with their siblings, in the (relative) safety of our own yard, this is the time to park the helicopter in the hanger, squash my own anxiety and let my kids be free to play crazy games, learn about taking risks and sort out their own problems.

For once… sitting on my backside doing nothing is being a good parent.

How do you decide when to intervene and when to let them be?

Home » When to Intervene