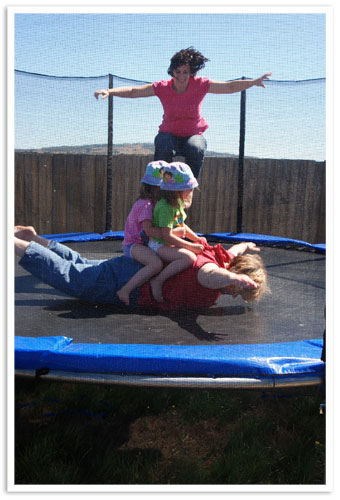 The Twinadoes got a trampoline for Christmas.

Ah heck, who am I kidding.. The Baldy Boy and I bought the biggest trampoline we could get because we really wanted one! Both of us have since admitted that as kids we always wanted a trampoline, a really big one, and since we aren’t lacking on space we got a 15 footer and it’s awesome!

The girls love it, spending hours out there, not just jumping but making up elaborate games like ‘space-walking-catch-me’ and ‘clean-like-cinderella’ (more on how our house has been taken over by Miss C Ella later). The Baldy Boy and I often sneak out after the kids are all asleep to have a quiet jump on our own so we don’t have to share with the girls, and even Muski has had a go and giggled and slobbered his way around the 15 foot circumference!

Last week, after a particularly crazy few days we decompressed with a visit from a GREAT Aunt and a cousin…. now unless someone else in the family dobs me in I am fairly sure I can get awaywith posting the above image without them knowing it….

Who cares if I get in trouble though, because what an ace photo! Yes that is the twinadoes, riding on the back of their aunt, while their cousin bounces everyone up in the air at once! I wanna go! me! me! me!

After last nights post I googled ‘fart fairy’ (as you do) and low and behold… I can buy a t-shirt with a picture of the fary fairy on it, so she must be real! Mind you I think I like this shirt that says “I am so pretty I fart fairy dust” – right up my alley really!

Home » Who needs friends when you have relatives like these…