There is something about the change of seasons that makes me want to change things as well. So yesterday, as The Father Figure worked on the new bit of the house, I decided it was high time the to make some changes in the old bit also. No more slacking off, no more ‘It’s not worth doing till the renovations are done’, yesterday was the day for doing, so I did.

I had one goal in mind… deal with the toys.

My poor kids have inherited a hefty dose of the ‘don’t throw that out it might be useful’ gene from both their father and I.

I am trying hard to get on top of my ‘just in case’ tendencies but it’s hard, so I’m doing my kids a favour and helping them evict the internal hoarder and let go of stuff early on.

We started with the girl’s bedroom. That room is one of the few places we have to store toys so it is kind of stuffed full of… well… stuff! Some of it HAD to go.

There were tears, and tantrums, and begging (mostly from me) and then finally negotiation. If they let go of the broken, out grown and never played with stuff, and packed away some of the things that they don’t use very often (with a promise not to throw it out), then we would make space for a writing desk in their room.

As much as I like the idea of us all writing, drawing, working and creating together on the dining table, with the limited space that we have at the moment, and with a baby who can reach anything near the edge of the table and destroy it in under five seconds, I can see why the girls were so excited at the thought of having their own desk. To have a special spot to sit and draw and write and play with all those tiny little Polly Pocket shoes is a dream come true for the girls, and with the school holidays coming up I thought it might buy me some extra space between arguing parties too. 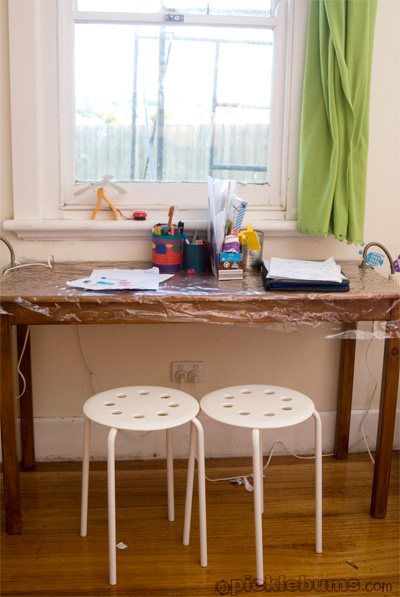 So we swept and sorted and excavated under the beds and vacuumed and negotiated and threw out until there was space to bring in the table. Nothing fancy, just a hall table we had been using to store clutter elsewhere and two super cheap stools from Ikea. Teamed with a few of our painted tin cans to store markers and pens and an old cereal box cut down to make a magazine holder and we were done.

Of course the bog boy wanted one too. There is not even a sliver of space left in our bedroom (our = me, The Father Figure and both boys) but there was a great space left in the dining room where the hall table had originally been 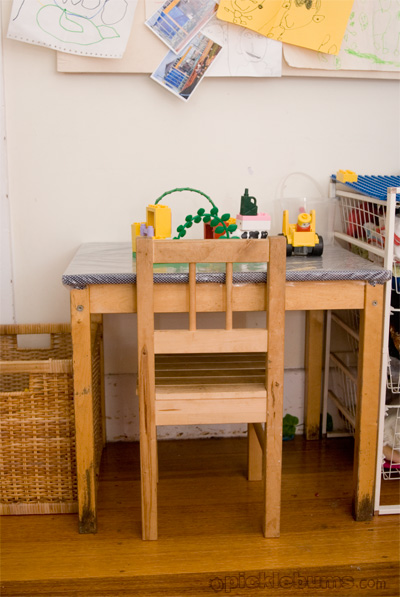 So we salvaged an old Ikea kids table that had been left out in the weather too long. The top was water damaged, split and discoloured, but the table was still sound. So I found a piece of material that fit and cut open a thick plastic bag and used them to cover the table top. I simply folded them under and stapled them on (it’s ace having all kinds of power tools lying around!). 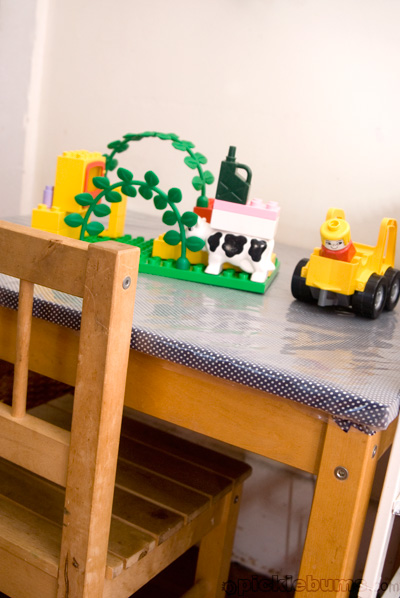 I’m not sure how long the plastic will last, but if it holds up ok I think we’ll cover our other Ikea kid’s table too!

I am not sure my kids will ever be ‘clutter busters’, after all, it’s hard to break free of your heritage! But hopefully starting out young and enjoying the benefits of letting go of stuff will at least set them on the right track!

Are your kids hoarders? Or do they happily chuck stuff away?