It is the end of the Twinadoes first term of kinder (preschool) (we have an appointment on Thursday so they will actually miss their last session). Some of you might be surprised at the lack of blog posts about the girls starting kinder. Surely that would be something big to write about? Well yes, it has been a BIG event in this house but it hasn’t gone all that well, so while we were all trying to stay annoyingly, overly, positive about the whole thing, I decided it was probably best not to spew forth all my negativity and worry all over the internet. (I saved that for a select few friends instead – thanks guys) 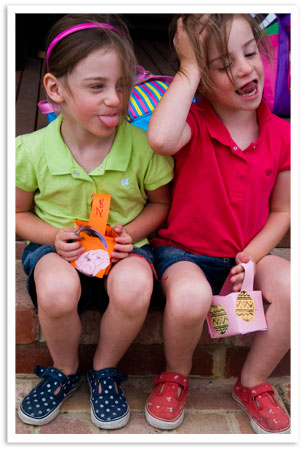 I’ve always had the thought, in the back of my mind, that starting kinder might not be all smooth sailing for the girls. They don’t cope with loud noises or in large groups, especially large groups of noisy kids. Social situations are hard for both of them – they take a long time to feel comfortable with new people and they stick together like glue. They don’t do mornings (like their mother) so expecting them to arrive two mornings a week at 8:45am (they are usually barely out of bed by then) is a big ask.

It is probably fair to say that socially, they are quite a bit immature. People who know them might disagree with this because when you see them together they appear to be very confident, very social and able to play quite complex co-operative games. The key word in that sentence though is together. They have barely been apart their whole lives. They are genetically identical and very very similar in all other ways. They know each other inside and out, so of course they play well together, are confident and appear social. Problem is, the rest of the world, other kids, are not the same as them – they don’t know them like the back of their hand, they don’t know what they are thinking or what they will say before they say it and because they have always had each other they have had very little practice at learning to be social in the wider world.

They were so excited to start and I figured if I dwelt on the possibility it might be hard then it would definitely be hard, so we sort of just le tit happen. The first two sessions were pretty good, then it went downhill from there. Given the above perspective, it is wasn’t really a surprise that they spent a lot of their three hour sessions crying, or that they didn’t want me to leave, or that when one cried the other cried, that they had ‘no friends’, or that the day I did kinder duty (where a parent stays to help out) was a total disaster. They have struggled a lot this term.

Thankfully their kinder teachers are lovely, on the ball, realising where some of the problems were coming from and helping all of us to deal with them. Now me, being an ex(on hold)-kinder teacher, I have pretty high expectations for what kinder should be like, and while I wouldn’t do some things the way the girls’ teacher does them in regards to the program (because of course I am perfect and no kinder teacher is as good as me right??) in regards to personality match for my girls, this kinder is perfect. Calm, confident teachers, with lots of cuddles and a bit of firm, quiet, tough love thrown in.

I have been kept busy second guessing our descision to send them to kinder and then school. Should we have waited another year? Will they ever do well in these large group situations? Is mainstream school really going to be for them? So many questions with, of course no concrete answers. I do know that if we want these things for our girls, if we want them to go to the local, (wonderful from all accounts) primary school, that this is all part of the learning process, and that while difficult, kinder is a good starting place to test things out and to learn these social skills.

So, this term we have all been working on making life at home as calm and easy possible, not putting too many things on our plates so that kinder could take priority. There was lots of talking about issues, lots of encouragement, and lots of cuddles and lots of tears. Still, things hit big bad rock bottom and I resorted to bribery (and it was the worst kind of bribery too! Shame, shame shame.). Clutching at straws to try and find a way to break what I felt was a cycle of doom and gloom. As much as I would never advocate bribery and feel like I stooped so low (and probably did more harm than good) it did, in fact, break the cycle – there was a whole session without any tears, and then another, and another… Then of course I had to break the cycle of expecting a junk food run after every session! (see why bribery is stupid!) but bribery not withstanding, things turned a corner and with a few other tricks up my sleeve these past couple of weeks have been so much better.

So this first short term of kinder is over. I won’t say that things are all roses at kinder, the girls still struggle to join in and play with other kids, they still need a bit of a push to get them in the door with a smile, they flatly refuse to play ‘dead fish’, but things are so much better than they were. They love all the activities, they now come home talking about who they sat next to for snack, they have even managed to remember one or two kid’s names and they are so much more confident than they were 6 weeks ago. It will be interesting to see what two weeks break does, whether we start back at the beginning next term, but I suspect that my days of bribery and corruption are over now, at least I hope they are!