I’ve had a hankering to try out this Chocolate Chip Cookie Bar recipe from Martha Stewart for a while now. I even linked to it in a quick linky love post on Saturday. I figured I would convert the recipe to metric measurements and more Australian ingredients and share my version of the recipe with you today, complete with some gorgeous photos. As an added bonus I’d also have something for lunch boxes this week.

It all sounded perfectly reasonable, but sometimes this whole cooking caper is not as easy as it seems!

Late yesterday afternoon I googled how much a stick of butter weighed, and decided I could just use self raising flour in place of the flour, baking soda etc, and that is possibly where it all started to go wrong…

Here is my version of the recipe.

First things first… I fired up the conversion app on my phone and figure out to preheat the oven to 180… this was going to be a cinch.

The butter conversion calculator told me that 3 sticks of butter was 340 grams… that’s a lot of butter and that alone should have been a sign that this was going to make a LOT of cookie bars, but I kind of missed that. By the time I was adding the sugar and whipping it up with my beaters I realised that the bowl I was working in was woefully too small for this large recipe, but I pushed on regardless.

When Morgan asked to crack the eggs into the mix I handed them over. We’d made a LOT of quiches over the summer and his egg cracking skills had greatly improved. The first one went in, no problem. The second one kind of exploded between his fingers with half the egg going in and half all over the floor. Oh well… never mind… I’ll just chuck in an extra egg.

Eggs in and mixed well, add the vanilla and then the flour. By this stage the inadequate bowl was making things rather tricky as we tried to mix in the four cups of flour, the choc chips and the cherries. After working up a huge bicep on mixing arm and losing a large amount of dough to the bench and the flour we were finally ready to put it into a tray.

I got out the builders measure tape with both centimeters and inches and measured up some of our baking trays. I was rocking this conversion thing!

Now I’m not exactly sure what a ’12-by-17-inch rimmed baking sheet’ is… but none of our trays were quite big enough, no problem, near enough is good enough right? The ‘bars’ would just be a little chunkier.

Into the oven… timer on for 20 minutes and off I went.

When I came back and cracked open the oven I realised things were not quite going to plan… The mix had risen, A LOT! It was all but spilling out over the edge of my tray. Damn. 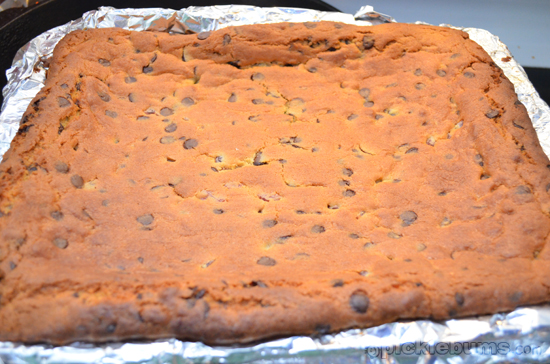 The edge of the cake/slice/giant cookie had risen and browned way too much, yet the middle sunk as soon as I took it out of the oven.

As I tried to lift it gently from the tray onto the board to cut it, the damn thing split down the middle and I could see that while the edges were dry and over cooked, the middle looked decidedly like raw cookie dough. Crap. 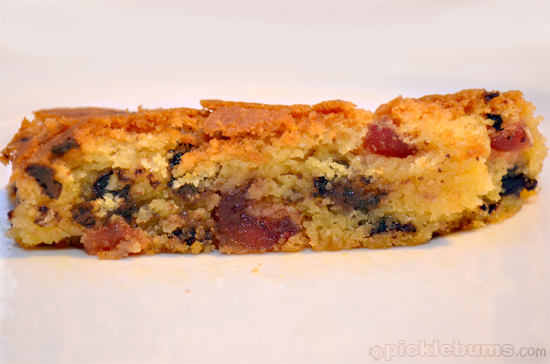 So what went wrong?

For starters this makes a LOT of mixture, I should have used a bigger bowl, or better yet, made half the quantity, that would have solved my not big enough tray problem too. The extra egg was probably not the best idea, neither was using all self raising flour… possibly changing on of the cups to plain flour might have helped?

Perhaps a lower oven temp (as well as the right sized tray or less mixture) would have helped the crispy outer, uncooked, sunken inner problem…. maybe?

And I really shouldn’t have attempted to cook anything while also making dinner and dealing with a sick and miserable toddler. 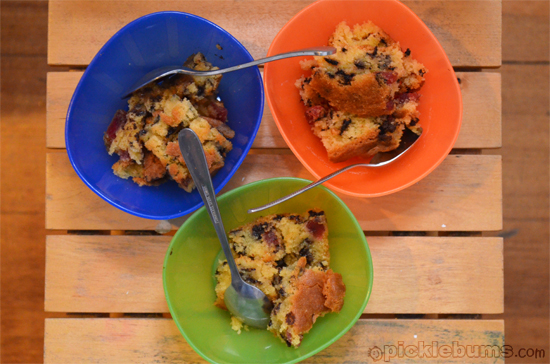 But all’s well that ends well. I managed to salvage a little of the slice to go in lunch boxes, the kids ate the gooey broken bits with a spoon for dessert and I still had something to blog about!

Want to make me feel better about my cooking failure and share one of yours?