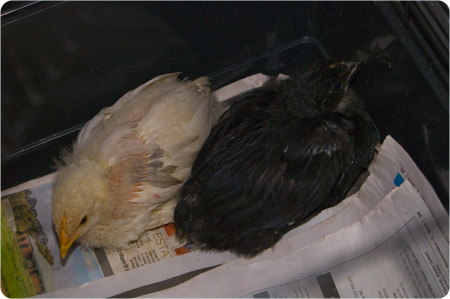 Life is frantic at the Pickle Farm today.

I have a sick kid, a back yard full of mud and holes, Christmas presents half wrapped and chickens in my kitchen.

Yes, chickens…. in my kitchen.

Two of them.
A black one and a white one.
And no, they are not waiting to be roasted, they are both very much alive.

Raising baby chicks wasn’t exactly what I had planned for the week before Christmas and yet here I am.

She was all keen to have those babies when she sat down and wouldn’t get up all those weeks ago. She was still keen on the idea when they hatched and was all psycho chicken baby protector for the first week or so.

But then, when she got out and about with her two new babies she could hear life going on without her on the other side of the fence. She saw the other hens busily scratching and laying and getting busy. Hamlet the handsome rooster gave her the eye through the gate and that was it. She was off.

Over the fence she flew leaving her babies behind. She wanted to go back to work, and she figured the kids would be fine at home on their own while she laid a quick egg.

The first day she laid her egg and came home. The second day…. well… after she laid her egg one of the girls invited her out for a drink after work, and then Hamlet asked her to dance and one thing led to another and before she knew it she was waking up next to the big black rooster the next morning, her kids left home alone all night.

By the time child protection arrived and attempted to usher her out of the office and back home she was over the whole idea of having kids. Kids just cramped her style, kept her stuck at home on the nest when she should be out laying eggs and partying. She’d already decided she was never going back….

The department attempted to place the two abandoned kids into a foster home, but the potential foster mum had 3 day old triplets and she wasn’t interested in taking on any more responsibility. So it came to pass that Penny and Seed became wards of the state and took up residence in warmest spot in the Department, the kitchen.

We should have known really…. A hen called Snow who is as black as black was always going to be trouble (for the record she was white when she was born).

Doesn’t she realise where she lives?
Doesn’t she know that we are into attachment parenting around here?

Abandoning your 3 week old babies to go back to work just doesn’t cut it on the Pickle Farm. And what’s worse… three weeks after deciding she didn’t want to be a mother she is back attempting to sit again! What? Is she just in it for the baby bonus? Is she trying to rort the paid maternity leave system and buy herself a flat screen TV?

Needless to say the Department has their eye on Miss Snow and she won’t be having any more babies for a while. And Penny and Seed are now happily chirping away in my kitchen and being cuddled to exhaustion by the big kids…. lets just hope they turn out to be hens and not dinner.