This post is sponsored by Nuffnang. Keep reading to the end for your chance to win a family pass to see the new Disney movie Tangled. 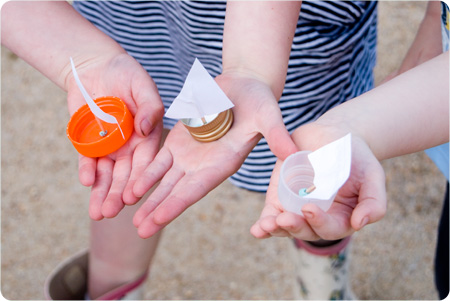 “First the worst, second the best, third the ugly princess….”

My ears ring to the constant cries of “It’s Not Fair!” and there is already a bit of competitiveness between the three big kids in our family. Who is the best at this, who should get more of that, who should go first at this, who came last at that. The addition of this lovely little rhyme that recently came home from school did not improve the situation. So I’ve been making a conscious effort to try and realign our ideas on competition and encourage the positives of joining in, doing your best and having fun, rather than worrying about who is first, second, or worse, ugly!

When the sun finally came out after days of rain I asked the big kids if they’d like to make boats to race down the raging river of our drive way. They were very keen!

There was much discussion about how to make a boat that would float the best and go the fastest. Of course the girls thought that their boats would win, because they were much better than their brother at making boats. Muski was unperturbed, he went for a boat with a square sail and high sides, ignoring his sisters comments that it would surely ‘drown’. 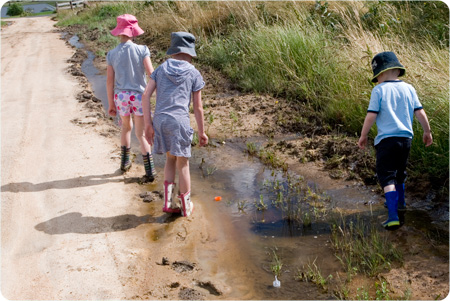 There was a lot of shouting as we ran along side the little boats zooming down the side of the drive way. Zoe’s boat tipped over and needed a new sail, and Muski’s boat was slow but certainly not ‘drowning’. Izzy’s boat was in the lead, way out in front, flying along. Zoe’s boat (helped by a little bit of ‘I need to make up time because of my broken sail’ type cheating) was beginning to catch up, and Muki’s boat lost it’s mast and sail completely, but still soldiered on.

Izzy started celebrating her win way before her boat was even close to the gate, but had to eat her words when it hit a snag and went under completely. Zoe just couldn’t keep her cheating fingers away from her boat and ended up capsizing it with her efforts. Muski’s boat sailed past them both, down a treacherous waterfall, and on to cross the finish line first with all of us cheering it on!

As we walked back up the drive way to start all over again Izzy said…
“That was so much fun…. even if I didn’t win. It doesn’t matter about winning when you are having fun.”

And with that the ‘Ugly Princess’ was gone… at least for a little while. 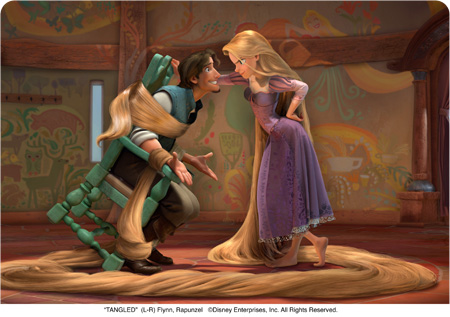 Thanks to NuffNang the big kids and I recently went to see the new Disney movie, Tangled in 3D! We all loved it! The story is fun, the animation fabulous and the 3D amazing!

Tangled is a new take on the old Rapunzel story. The media release describes it as “an action-packed, swashbuckling, animated musical comedy about the girl behind 70 feet of magical, golden hair who takes off on a hilarious, hair-raising escapade with the help of a dashing bandit”.

My girls describe it as “better than Christmas!”

The girls were laughing one moment and gasping in surprise the next and Muski (who has never been to a real movie before) sat glued to his seat the entire movie, except for when he tried to get up to touch the butterfly that appeared to be right in front of his hands! Since then the girls have been singing the magic hair song over and over and Muski is asking us all to call him ‘Flynn Rider’ (he’s the ‘dashing bandit’).

There are some scary-ish bits, but nothing too frightening and there are loads of laughs. I enjoyed it and especially enjoyed taking my big kids and watching their faces light up with excitement. We all highly recommend you go and see it over the holidays!

Two lucky Picklebums readers can win a family pass for four people to see Tangled, thanks to Nuffnang and Disney!

All you have to do is tell me what your favourite Disney move is and why!

The lovely people at Nuffnang and Disney will choose the winners based on how creative your answer is, so get your comments in before  Sunday 9th January 2011. The competition is open to Australian residents only, please read the full terms and conditions here

You can also win $500 by entering the Nuffnang Tangled Community Contest. Just write a blog post about a personal, funny boy vs girls experience, include the trailer link and a reference to Tangled and you could win! See the Nuffnang blog for more details!

The Picklebum kids and I would like to say a personal thank you to Lynda at Nuffnang who worked hard to get the Tangled tickets to us at the last minute – thank you for a wonderful afternoon at the movies!

***This give away is now closed. Winners will be notified shortly***

Home » Boat Races and a Tangled Ticket Give Away!