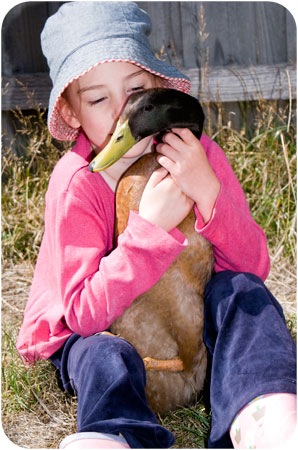 Izzy loves him so, despite the fact that this duck is well and truly insane.

Infected with a mental duck illness that makes him attack and nip at exposed flesh. He grabs on and just won’t let go. Despite some really nasty bruises Izzy still loves him… and he still loves her, letting her cuddle and hold and carry him about without a single nip… till she puts him down.

She was at ballet the other night when her teacher asked her how she got the nasty black green bruise on her arm, and the one of her leg.

“The duck bit me” Izzy replied.

Her teacher looked over in my direction with a puzzled look on her face.

I could feel myself turning red. What if her teacher, or worse, the rest of the mothers watching and listening, think that I am the one inflicting these terrible bruises on my child. Because, after all… a duck doesn’t have teeth, it can’t bite.

After class her teacher came over…. uhoh… time to explain.

“Izzy tells me the duck ‘bit’ her” her teacher says, thankfully with a slight giggle.

I relax and say that in fact yes the duck did bite her and despite the fact that he has no teeth he is a slightly insane boy duck who is constantly looking for a fight and/or a girlfriend and inflicts some nasty bruises along to way.

“But I love him.” Izzy says very seriously…..”except one day he’ll be dinner”.