Sure we could go into town and pick up a loaf for around $2 but somehow it is not the same thing. Maybe it is the fact that we never have bread when we want it? Or that getting three kids dressed and in the car and then out and then in and then out again is probably harder and takes longer than just making it yourself! Or maybe I am just really really cheap! Regardless – the Twinadoes and I, like to make bread. 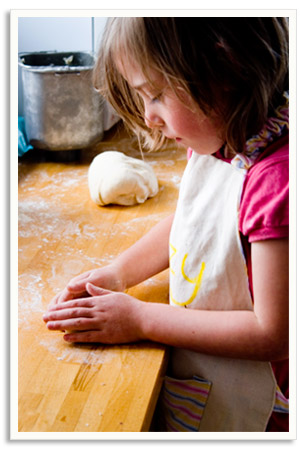 We cheat a little when we make bread… We let the bread machine do all the hard work. We wack all the ingredients for whatever bread we are making in the bread machine bowel and set it to dough – this mixes, kneads and rises it for the first rise in a little over an hour without me having to do a thing. Perfect! The Twinadoes help to measure out and mix the ingredients and really enjoy the ‘punching down’ part after the first rise and will sit and play with a bit of dough for hours… it can really help on a day when things are a bit fractious.

For some reason I struggle to get a decent second rise out of our dough so I am still working on a decent regular loaf of bread. I go through stages where I just refuse to make a loaf because they never turn out quite right but then it gets the better of me and I will make a few trying to figure out how to get it all to come together. One day I just might succeed, though the chances of me repeating it twice are not great.

So instead of bashing my head against a brick wall with the whole loaf thing I just resort to ‘easy bread’ – things that don’t need much rising to be good. Here are our favourite recipes for our top three ‘breads’.

Pizza
This is what started me thinking that I could actually, possibly, maybe, cook with yeast… maybe. We got a Pizza stone and pizza book a few Christmases back (thanks Julia!) and since then we’ve really perfected our favourite basic pizza dough. A basic dough can be used for so many things; pizza (well obviously!) foccaccia type bread, or calzone (our current favourite!).

Makes four(ish) 25-30cm pizzas – I’ve found if you roll it thin you can wack half the dough in the freezer and make do with the other half to make two medium sized pizzas and two small, enough for the four of us.

Mix the yeast into the water and leave it for a few minutes until it has gone all bubbly and frothy. Mix the salt well into the flour and place in a large bowel (or the bowel of your bread maker if you are cheating like us).

Depending on how big you make your Naan you can probably get away with freezing half this dough and still have enough to accompany a meal for 4 people.

Mix the sugar and water in a container, add the yeast and leave it until it is frothy. Add the cooled melted butter (you need to make sure this is only luke warm or you will kill your yeast), the beaten egg and the yoghurt (or milk) to the yeast mixture and mix gentle.

Mix gently until combined and then knead well for at least ten minutes. Leave to rise for 1.5-2 hours or until it has doubled. Or – wack it in the bread machine, set it to dough and come back when it beeps.

Punch down the dough (just wack at it and knock the air out-it’s fun!) and then give it a good knead for a few minutes then divide it into balls. Then with your hands flatten out each ball and work it into a roughly circular flatish shape. I’ve found that if you make them too thick they won’t rise well while cooking so I try to flatten them out to around 1 cm thickness for small naans. Pop them on a tray and let them rest for 10 minutes (again we often don’t do this cause we are running out of time!) then pop them in a hot oven (200 degrees C) for about ten minutes or until they puff up and are starting to turn golden brown.

Tortillas
I’ve already blogged my tortilla recipe and perhaps tortillas aren’t exactly ‘bread’ since there is no yeast in them, but that is what makes them good to bake as there is no waiting around for rising etc etc… and they taste dam good! I suck at rolling them out to resemble a circle, and the girls love to help with that bit so we often have some odd shaped tortilla’s for dinner, but they still taste good!

So there you have it, now off you go… Go make bread!