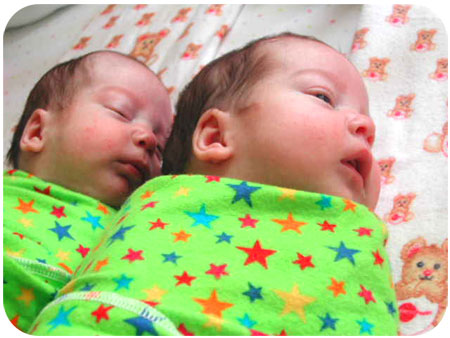 Every now and then I get to thinking about the whole ‘twin thing’.

Out of the blue it struck me the other day… our girls are very rarely alone.

They spend probably 90% or more of their time together. They share a bedroom. They are in the same class at school. They play together. Often they even bath or shower together.

We work at making time for them to do things ‘apart’…. but even then they are not usually alone. They are with their brother or me or their father.

This is their choice. When given the chance to do something on their own they usually choose not to, though I admit they don’t often get the opportunity to be alone, even if they wanted to.

Is this normal for a six year old?
Is this just how it is when you are part of a family of five (soon to be six)?

I really quite like to spend time on my own. I relish an evening when The Baldy Boy is on night shift and the kids are all asleep and I can just be alone and do whatever. As a child I remember relishing the sanctuary of my bedroom, somewhere that was just mine, somewhere to be alone.

But I am not my children and my childhood is not their childhood, and most importantly, I am not a twin. I have no idea what it is like to be a twin. To have someone who is so much like you, who has always been there, who you know so well and who knows you back. I only have one sibling and I can’t say my brother and I have ever been close….

Of course this is just another version of the ‘together/apart’ debate which seems to constantly haunt me. There are ‘professionals’, not to mention a heap of books, that all push the line that they need to spend time apart. That we have to really encourage them to be individuals and to separate, that they have to be able to cope ‘on their own’.

While I think that learning to cope in the world on their own is important, I am not convinced that it is the be all and end all. I don’t feel that we have the right to choose when, where or how they separate, or to push them into doing it if they don’t want to. Sure, there are times when they have no choice but to be apart, and we are working on helping them deal with that, but I am not sure they need to be apart to be ‘normal’ or to be ‘happy’.

But is having some ‘alone’ time the same thing?
Do they need time alone to unwind? de-stress?

I find all of this so tricky. I have no idea what it’s like to be a twin and most books and professionals who spout advice about this don’t either. Child development and parenting books and theories are based on your average singleton child. Being a twin, an identical twin, is different. It stands to reasons that twins would be different in some ways, especially socially and emotionally, but are those differences bad? Or is it reasonable and healthy to expect children who are genetically the same (98.9 % the same in our case) and have had pretty much the same life experiences to be pretty much the same and to not need the same ‘apart/alone time’ that others do?

As usual I come up with way more questions than answers.
Why oh why isn’t there some magical book that will tell me how to figure out this tricky stuff, because really I have no darn idea!