I had grand plans for what the Middle Boy and I would play today. Grand plans for getting out the puppet theatre and puppets and putting on a show… But sometimes grand plans get scuttled by a morning full of tantrums and tears and just needing five minutes peace to regroup… and before you know it grand plans turn into this… 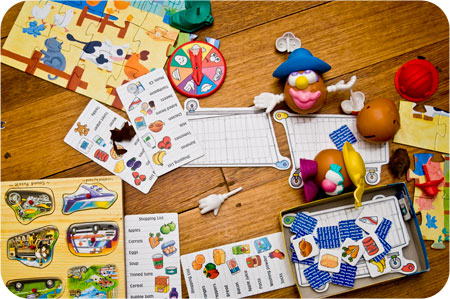 It was a get every single puzzle and game out of the cupboard and spread them across the floor kind of day.

I have to confess that this kills me. The fact that he gets out and unpacks 5 different puzzles and three games drives me nuts, especially because I am the sucker that ends up sorting it all out and packing it all away. Plus, I have to admit, I am not a big fan of puzzles and board games.

The girls became puzzle crazy at about age three and Muski is no different. He’s been putting together our 20+ piece floor puzzles on his own since he was about 2 and a half and he’s now tackling some of the bigger puzzles with a fair bit of success. And there are loads of benefits of puzzles. They are good for developing and practising a heap of skills, such as problem solving, eye hand co-ordination, spatial awareness, memory etc.

Despite all of that I still can’t get excited about puzzles.
It’s a personal thing. I find them boring. Once you’ve done a puzzle then you’ve done it, there’s no new way to do it, it’s done. And board games…. kiddy board games? Snore! I know, I know, bad mother…. even more bad preschool teacher (with worser grammar).

Puzzles and games just don’t float my boat.
They float my kid’s boats though, and that’s ok. 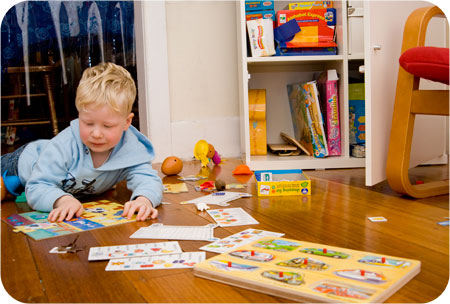 It’s ok became Muski has spent a good hour putting each puzzle together and setting up Mr Potato heads and matching shopping items to shopping lists. Sure it’s not the puppet show I had planned, but then this isn’t about me. He’s having a great time, and learning as well…. so all that I need to do is attempt to pack up the mess with a smile on my face, if I can!

I’m joining in with childhood101’s We Play link up today – head on over for more great play ideas!

Home » We Play Puzzles and Games and Everything!