*** This blog post is about killing and processing our own home grown chicken. There is no graphic images, and I don’t describe the process in detail, but if that is not you thing, that’s ok, I understand, click away now ***

In the very early spring of last year Jasmine, our bantam hen, hatched one baby chick. The chick was named Dash, because it ‘dashed about the place’ all the time. We were hoping that Dash was a she, not a he, but as Dash grew and grew and grew it became obvious that Dash was indeed a rooster.

We already have a rooster, his name in Hamlet. He is a beautiful, majestic, placid, black barnevelder rooster and his son Dash quickly grew up to be just like his father. Initially the two boys got along just fine, but recently things became difficult between them. Both crowing and preening for the top position, and both with rather impressive spurs, it was a recipe for disaster.

We simply can not keep two roosters.

Way back when our first chick hatched (sadly mother and baby both died a short time later) we began talking about what we’d do if we got roosters. We explained to the girls why we couldn’t keep more than one rooster and we talked about how we might deal with that. That was the first time we broached the subject of eating our home grown chickens.

We are not vegetarian or vegan. While I respect those who are, it is not for us at this present time. We are, however, trying to be more mindful of what we eat, and how it is grown and prepared. We’ve been working towards eating more whole foods, cooking things from scratch, eating less processed nasties and growing our own food. After some discussion, initially between the adults and later including the big girls, we felt fairly strongly that if we could not kill, process and eat our own home grown animals then we should not be eating animals at all.

We can’t afford to only buy meat from lovely local producers at the farmers market, or even to buy organic meat from the chain supermarkets. What we can do is grow our own chickens, ensure that they have a full and happy life, that they are allowed to be chickens, scratch in the dirt, eat grass and bugs and all kinds of good food, hang out with other chickens and yes… be loved and cared for by us. Not only do I believe that this is infinitely more respectful and humane than how most meat animals are bred and kept, I also think this produces a better quality of food.

So we were firm on what we believed and why, but as Dash got older and as his final day loomed closer, I am not ashamed to admit that The Baldy Boy and I were both a tad apprehensive about the whole she-bang. We put it off for a while, neither of us being able to decide on the perfect day to do the deed…. that is until today.

Today Dash met a quick and humane death. He was plucked, cleaned and processed (I helped but Baldy Boy did most of it) and cooked lovingly (that was my job) and enjoyed by our family. 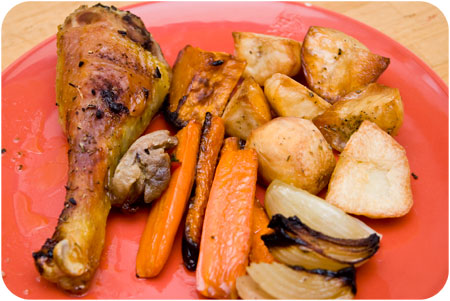 This is all that is left of our chicken dinner!

So it has been a rather momentous day at the Pickle Farm. We all learnt a LOT. Things we’ll do differently next time, whether or not there will be a next time, and how very different home grown and processed meat is. I had no idea that chicken had loads of fine wispy hair like feathers, nor did I know that their skin is normally a golden yellow (commercial chickens are often bleached to get the creamy white/pink skin). I know I need to get a whole lot better at jointing and cutting up a chicken, but I was surprised at how well we did following online instructions to clean and process the meat.

I know some of you may be horrified at the thought of this, even more so that our children were part of the process (I assume the girls would have been part of the plucking and cleaning, at least to watch, had they not been at school. The Small boy was super interested and watched some of it before he got bored), but I’ve thought long and hard on this. I want my children to know where their food comes from. I want them to understand that when they eat meat, that means that an animal died. I want them to be capable of making truly informed decisions about what they eat.

We did not force them to eat the chicken dinner tonight, I wasn’t even sure how I’d feel about it when it finally came to dinner time. We have been upfront and honest about the whole process from first discussion to plate and I was quite happy for them to just choose veggies, but they didn’t. They commented about the differences, they loved the extra crispy skin and they asked for seconds. They also thanked Dash for a good dinner.

And who would have thought we inner city dwellers who once thought nothing of living so close to our neighbours we could hear them fart in the shower…. who’d have thought we’d be growing and eating our own chicken one day!?

Home » The Story of Dash the Rooster.