My kitchen window sill is sprouting! Well, ok, technically the things growing in little pots and toilet rolls on my window sill are sprouting, not the actual window sill, but that didn’t sound nearly as fun!

Part of the Growing Challenge over at One Green Generation is to grow things that you have never grown before from seeds. We planted these about two weeks ago now and have been patiently watering and waiting to see how soon they would sprout. 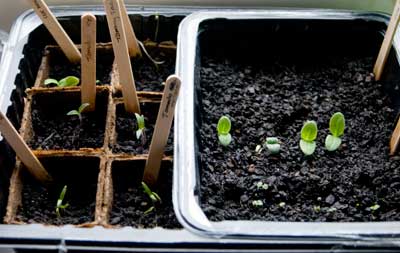 At the end of last week we discovered the first sprouts. Borage was the first to get going, closely followed by two Tommy Toe tomato sprouts. Now, about a week later there are heaps more seeds sprouting – lemon balm, two more tomatoes, two varieties of cucumbers, Black Jack zucchinis, a squash and a Turks Turban Pumpkin! 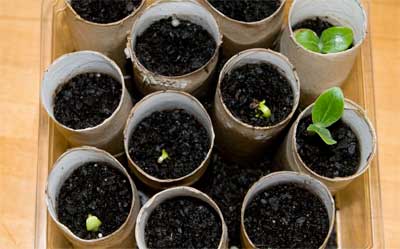 We are still waiting on the watermelon and cantelope seeds to get going, as well as the butternut pumpkins, cone flowers and the luffas but all of those generally need warmish soils for germination and I think even on our window sill it probably hasn’t been consistently warm enough yet for them. Last night was the first night in ages that the air wasn’t freezing and chilly so I think spring is really here and with more sunny days on the way I expect more sprouting seeds soon.

Sometime next week I think we’ll start a second round of seeds and I need to find some time to get out and finish preparing the last of the garden, not to mention trying to decide where all of these will go! We usually still get frosts right into November so I have hopes of putting some of these early seeds out in the ground under cloches but I have no idea what to use to cover them. I need to do some googling on what recycled materials we could use for cloches and get organised. I also want to sort out better companion planting – I got quite a few flower and herb seeds this year with the idea of putting lots of them in and around the veggies which I am excited about.

Oh I almost forgot outside garden news! Finally my peas have sprouted. I think they are being attacked by slugs (hoping the frog we found living in the strawberry patch right next door to the peas will be feasting on the slugs for us!) but we put in LOTs of seeds so I am hoping that safety in numbers might save them from the slugs and that they go great guns in the next few weeks and give us some spring peas! YUM! Still no sign of the potatoes we planted out, but the garlic looks to be going well and the lettuces and bok choi seeds we saved from last years crop has also finally sprouted.

I took a deep breath and divided the rhubarb the other day. It was a lot easier to dig up and divide than I had anticipated – it practically fell into nice bits as I dug it out. We’ve got about ten plants from the one big one – including half of the original that I left where it was, just in case dividing and moving the others all died. I doubt if all of the divided plants will take as some had not much roots or no leaves but we have the space so I wacked them all in anyway. One or two will go back to my mother-in-law who gave us the original plant but if all the others grow we’ll have enough delicious rhubarb to feed an army, so fingers crossed.

Finally it seems likes spring is here at last and it is all systems go for the garden!