This simple box tunnel is easy to make and lots of fun to play with!

The next time you have a large box you need to make this easy box tunnel for your kids. 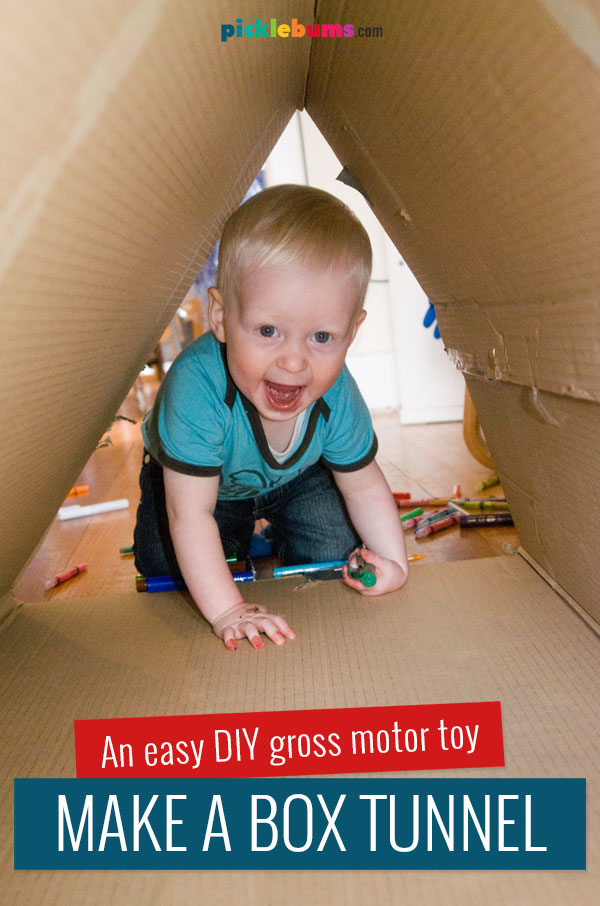 We’ve had quite a few big boxes lately and we’ve made a Lego town with one big flat box, but this time the box project was for the smallest member of our family.

Our youngest doesn’t say any useful words such as ‘Mamma’ or ‘drink’ but he can say ‘hiding’.

“Where’s Noey?” his siblings ask him constantly.
And his reply is always “Hiding!”
Even though he is quite obviously not hiding!

Clearly he needed somewhere to hide, and somewhere fun to try out his crawling skills, so we made him a box tunnel. 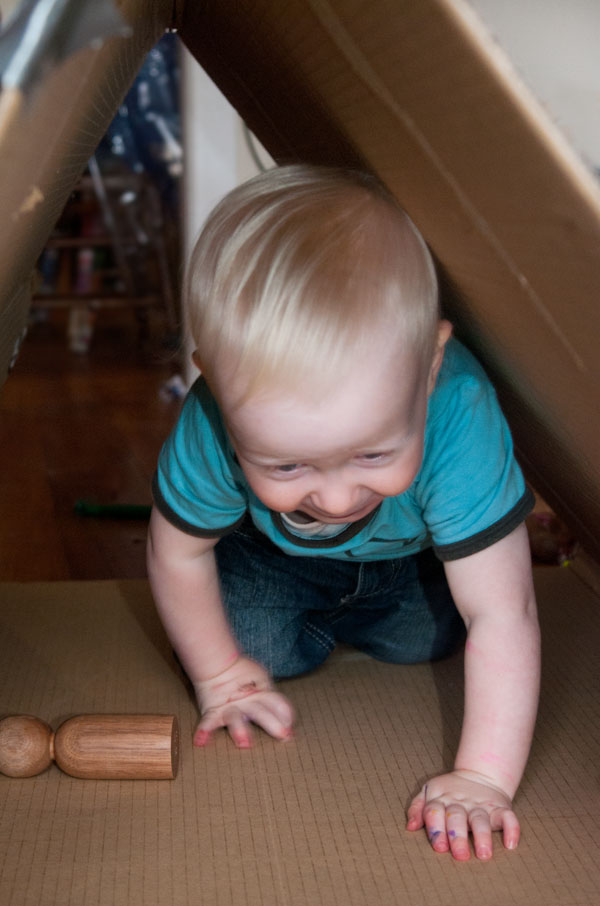 How to Make a Cardboard Box Tunnel for Kids

To make a box tunnel for your kids all you need is a large box or a big flat piece of cardboard.

If you are not getting any new appliances you can often get large appliance boxes from retail stores if you go and ask. Or put the word out on your local Facebook group and see if anyone in your neighborhood has gotten a new fridge lately.

You’ll also need something to cut and score the cardboard with, we used a box cutter, and some strong tape.

If you are starting with a box, split down one corner to make a large flat sheet of cardboard. Use the existing folds/corners and overlap two sides of the box together on the bottom to turn it from a box to a triangular tunnel. Tape up the bottom so it stays together and you are done.

If you are starting with a flat piece of cardboard, roughly divide the cardboard into thirds along it’s length and score along each line. I used the back of the box cutter to score my lines and you can use a ruler or another piece of cardboard to keep your lines straight, but they don’t need to be perfect. Fold along each of your scored lines and tape the edges together to make a long triangular tunnel. 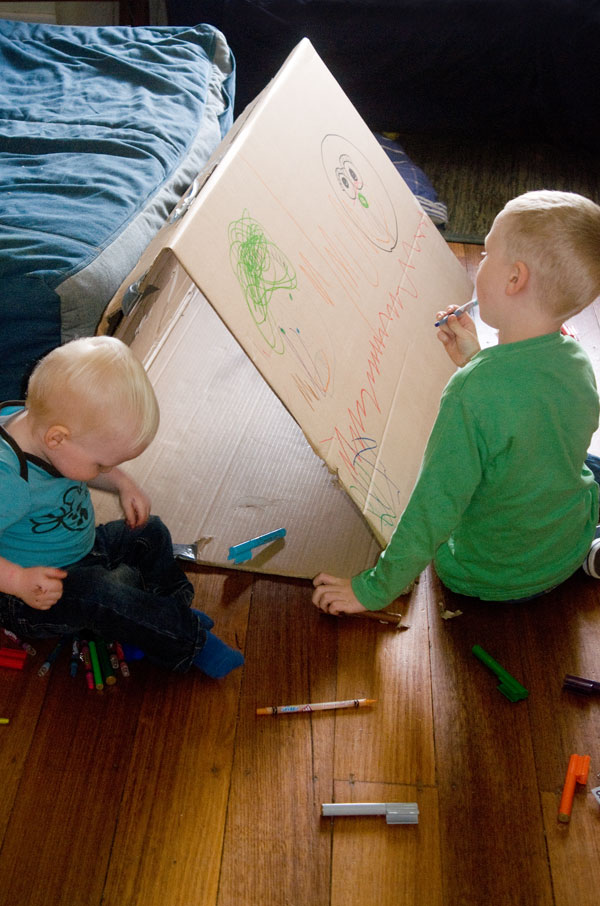 Making the tunnel a triangle gives it some extra strength so it should last for a while, or until a big kid jumps on the top and squishes it!

Grab some markers or paints and add some decorations to the tunnel for some extra arty fun! 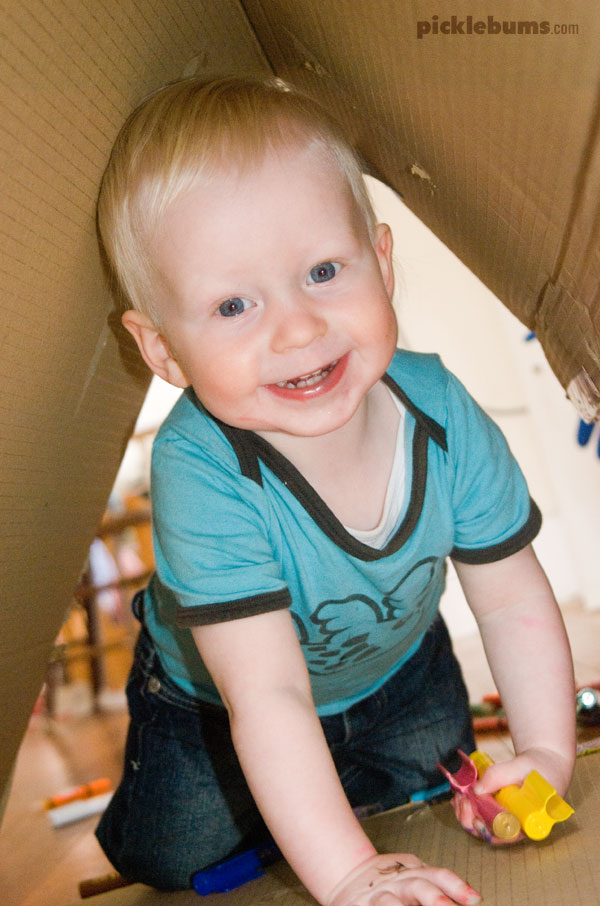 This easy to make cardboard box tunnel is a great indoor gross motor activity for crawling babies, and older kids.

Toddlers will love crawling through the tunnel, or rolling cards in one side and out the other. Older kids might like to lie down and draw on the inside walls, or snuggle up and relax.

It’s great for encouraging some activity play inside on a rainy day, and it also makes a great place to hide! 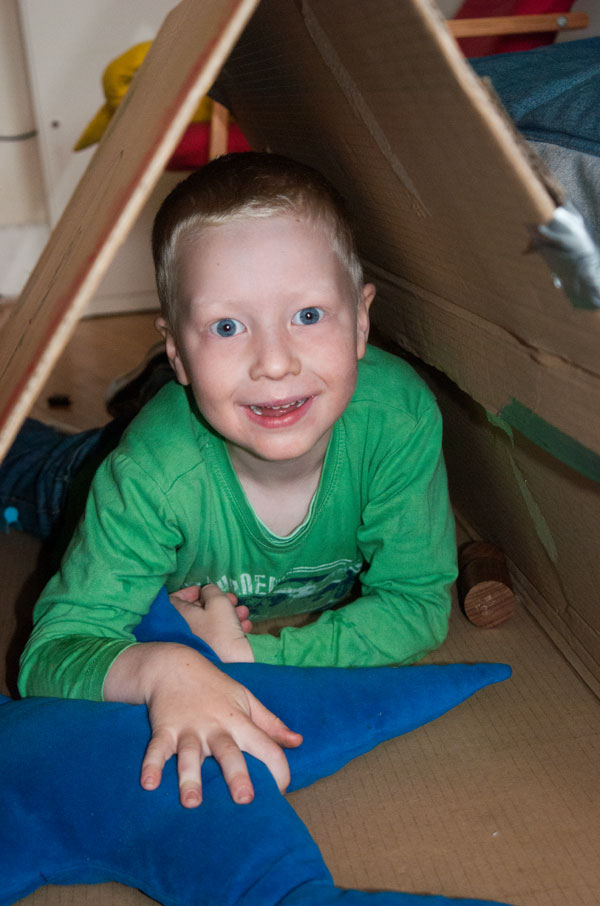 So the next time you come across a big box or a really large piece of cardboard, grab it so you can make your kids one of these simple but super fun cardboard box tunnels!

Home » How to Make a Box Tunnel