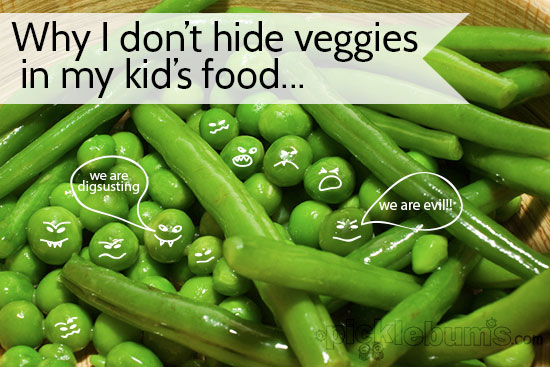 A few years back it was all the rage in parenting circles to puree the heck out of veggies and hide them in more ‘kid friendly food’.

Recently I’ve seen this kind of idea resurface again and it’s bugging me.

I know that getting kids to eat can sometimes be a battle.
I know because I’ve been there, I am still there.
I have one child who has very, very specific tastes and who has spent large portions of her life eating a very narrow selection of food.

I admit it has gotten me down. I have worried about it, yelled about it, pleaded, cried and spent a ridiculous amount of time trying to come up with food that she will eat.

I briefly courted the idea of hiding veggies (and other foods) she didn’t like in food that she did like, but it just doesn’t sit well with me.

If I want her to broaden her tastes and try more foods, how does disguising that food work towards that goal?

How will she know how good peas can taste if I am always hiding their flavour with other foods?

How will she know she has even eaten a pea if I constantly lie to her about what she is eating?

Will she grow up to be an adult who still needs her mum to puree veggies and smuggle them onto her dinner plate?

It just doesn’t make sense to me as a long term solution.

But what really gets to me is the deception.

If she eats the peas hidden in the sausage rolls (which she wouldn’t because she doesn’t eat pastry, unless it is on my homemade meat pie, but only if it’s crispy all over – see I told you I had experience with picky eaters) and then I tell her that I tricked her into eating her most hated vegetable, how can I expect her to trust me?

Not only does this method erode trust, but it associates food and eating with lying and deception. I want her to have a healthy understanding and relationship with food now, and in the future. There are already enough negative messages about food and eating and weight out there without me adding to it.

Don’t get me wrong, I don’t think adding pureed veggies to recipes is bad.
I do it all the time to add nutrition, extend the amount of food, make recipes more budget friendly, or tastier, but it is not done as a trick or hidden from my family. 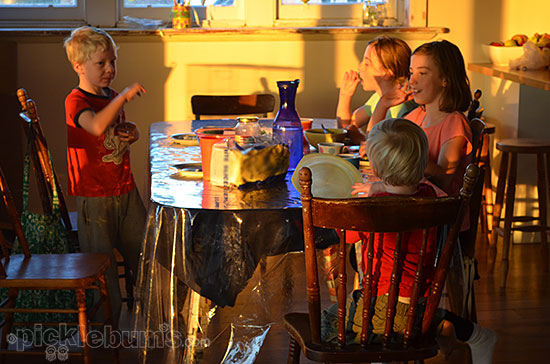 Over the years I have all but given up on the guilt over what my kids eat and I have worked on accepting what and how they eat is part of who they are and how they are growing up.

I haven’t given up on trying to get my picky child to eat, but I have accepted that she won’t starve herself and that she knows when she is hungry and when she is not.

I try to work with my picky eater’s likes and dislikes – ok so she may not like peas but what other green vegetable might she eat? What does she love that could go with those veggies? She will eat an enormous plate of roasted broccoli drowned in mint sauce, but she still won’t touch a pea.

I haven’t given up on trying to get her broaden her tastes, but I have accepted that she is allowed to have likes and dislikes.

I give her lots and lots of opportunities to try new foods, and to retry old foods, to talk about why she doesn’t like them, why I think she should try them, what may have changed about them or her over the years, and then we try it all again in a different way, but without tricks or guilt trips.

I also don’t cook a different meal for her. I try to avoid meals that she entirely dislikes, but we don’t ban them all together. In those cases she is dished up a small serving, but usually chooses to eat a piece of fruit or raw veggies that she gets herself, and I am ok with that.

I also give her the chance to say no… politely. The rule in our house is ‘you don’t have to eat it but you may not be rude about it.’

I can totally understand why in extreme cases, or for kids who have sensory issues, pureeing food might be the answer to your prayers… but for me and my picky eater, we’ll just keep trying.

Do you have a picky eater? How do you manage it?

{Image adapted from this one by Matt Bidulph}

Home » Why I don’t Hide Veggies in my Kid’s Food.