When you have breakfast for dinner it’s called ‘brinner’, and it’s awesome.

It’s awesome because kids love the novelty of having food that would usually be considered breakfast, at dinner time.

It’s awesome because you often have a bit more time to prepare dinner, so you can try out all those fancy recipes that you never have time to actually make in the mornings.

It’s awesome because it’s one less dinner idea you need to come up with, which make just save your sanity.

And it’s awesome because even when all you can manage is cereal for dinner, you can call it ‘brinner’ and it sounds like a fancy meal! 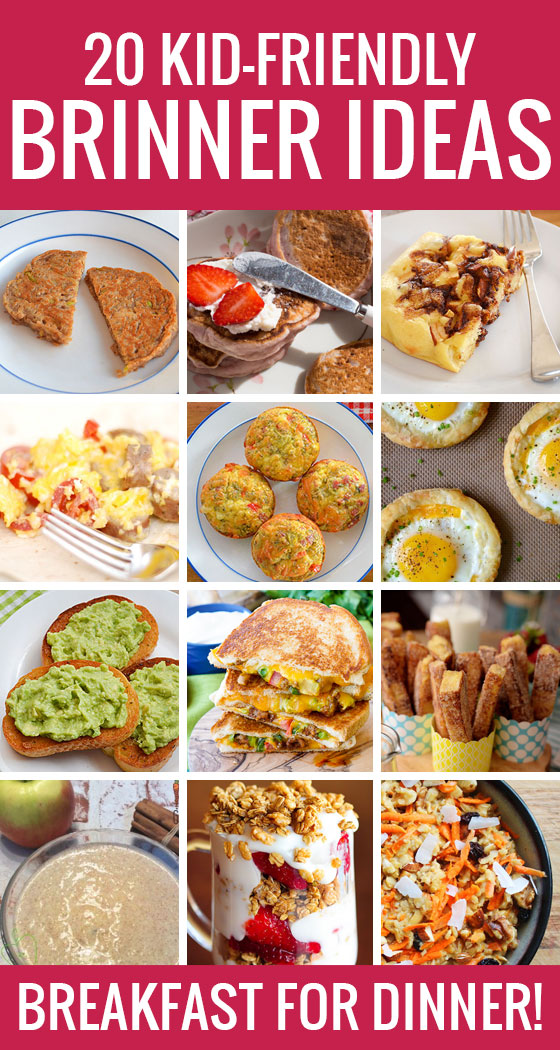 Pancakes are the perfect Brinner option. You’ve got loads of time to cook up a huge stack of fresh pancakes and there are so many ways you can make them!

These apple and oat pancakes will fill up little bellies thanks to the added oats.

Or fill a pancake pocket with whatever filling you like – it doesn’t have to be sweet!

A pikelet is a mini pancake and this raspberry and ricotta pikelet recipe could be adapted to use all kinds of fruit.

Or if you don’t want to stand at the stove for an hour flipping pancakes try this delicious, quick and easy, baked apple and cinnamon pancake

Eggs are a great Brinner option, they are cheap, easy to prepare, and have lots of protein and all kinds of other good stuff.

Scrambled eggs is our go to Brinner, and this Mexican Egg Scramble (we make it without the sausage) is a favourite.

You can make lots of ‘muffins’ or mini quiches with eggs. We love these easy mini pizza quiches and these scrambled egg muffins.

Or just go with a big quiche, this is our favourite recipe for crustless quiche.

Toad in the hole sounds weird, but it’s really just an egg fried in a hole the middle of a piece of bread, and it’s great.

Bacon and egg muffins are a good brinner option – I like this idea for making a whole lot quickly and easily.

Ah toast… so quick, so easy, so many options!

My kids think french toast is like having dessert for dinner, but I make these french toast sticks without the cinnamon sugar and give my kids yoghurt to dip in and a big bowl of fruit salad, so it’s actually kinda healthy.

And if I had a waffle maker I’d totally make these french toast waffles for brinner!

Good old cereal, saving parent’s sanity at meal times for years! I know a big bowl of packaged cereal is probably not the healthiest dinner, but you don’t have to be perfect all the time, and there are a few ways you can make it a little more filling and healthy…

Add a big helping of fruit salad, a sprinkle of nuts (if you don’t have allergies like we do) or seeds, and a big dollop of youghurt to top off the bowl of cereal. I love these homemade flavoured youghurt ideas.

Get a little more fancy and make some baked oatmeal. The carrot cake oatmeal is like eating cake for dinner!

Brinner can be as complicated and fancy as you like, or as simple as a bowl of cereal, and it can be a lifesaver on those days when you just can’t face making another dinner.