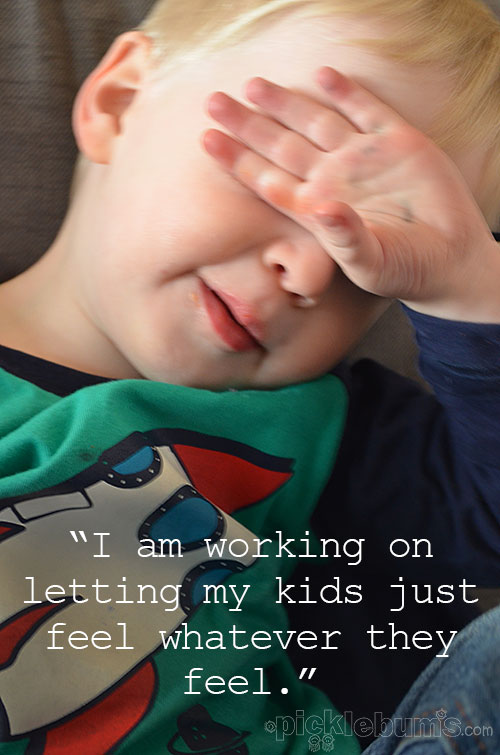 He’s raging over what seems to be such an insignificant thing.

She is being surly and selfish and rude.

I want to tell them to simply stop… stop being so rude, and nasty and self centered.

But by doing that I am telling them to stop having those feelings. And while sometimes I wish my kids never got angry, or were selfish, or hand any number of more negative feelings, when I can step back from the moment and think about it, it is not only unrealistic to wish that, but also unhelpful.

In the calm after the storm, when I have space to think about my own feelings and reactions I realise that don’t want my children to not have those feelings, I just want them to learn to deal with them better. What I really want is for them to figure out ways to express those feelings and deal with them in ways that are healthy and less destructive for themselves and others.

Squashing those big negative feelings won’t help them deal with them, and, in the long run, it won’t stop them happening. It won’t stop the difficult behaviour that results from those feelings either. But it may teach them that feeling angry or selfish or grumpy is not ok and in turn that they are not ok for having those feelings. That is not something I want to pass on to my kids.

So I am working on letting my kids just feel whatever they feel.

I am working on setting aside my own discomfort that stems from having to deal with difficult behaviour, or from feeling bad that my children feel bad.

I am working on separating the feelings from the behaviour.

I am working on telling them it is ok to feel angry, or disappointed, or sad.

I am working on offering them other ways to deal with those feelings.

I’m working on those things for myself too.

How do you deal with big feelings at your place?