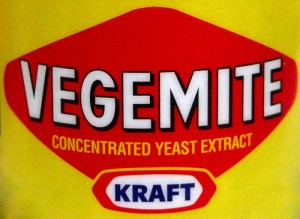 I realise vegemite is an aquired taste. I realise that if you are not an Australian you might not even know what this black salty stuff is, and I realise that if you are a non-Aussie then your chances of finding this stuff anything less than revolting is slim to none. However, I have always held firm to the notion that if you were raised eating vegemite you will love it, or at the very least tolerate it, for life. Personally I love the stuff… in a sandwich, on toast, on crumpets… always with lashings of butter or marg. I’ve bought up my children to love the stuff – they’ve eaten it from a young age and always like it… except one.

I can’t believe I have grown, birthed and raised a child who doesn’t like vegemite.

She used to eat it when she was little, but these days Izzy boldly informs me that she has ‘gone off’ vegemite and doesn’t know when or even if she will ‘go back on it’. It is a terrible, terrible, tradgey. A slap in the face to this vegemite loving mother and a right royal a pain in the bum when it comes to sandwich making. In a house without peanut butter the only other quick, easy, spreadable sandwich option is jam. Jam?!? On bread? Sweet with Savoury? Ugh… gross!

I’ve tried to pursuade her, to encourage her back into the fold, and yet, she stands firm, refusing to join what is right and natural and instead going against the grain and asking for jam. Worse still… she is influencing her sister who informed me today that she might think about ‘going off’ vegemite too soon.

What is the world coming to?

Yet, all is not lost…. There is still one small member of my household who eagerly joins me in a vegemite sanger. Not only does he love it, but he calls it “Yum-ite”. Ah, a boy after my own heart.

Home » For the Love of Vegemite