We grow most of our veggies and flowers from seed. I used to think that was too hard, but actually it’s pretty easy! 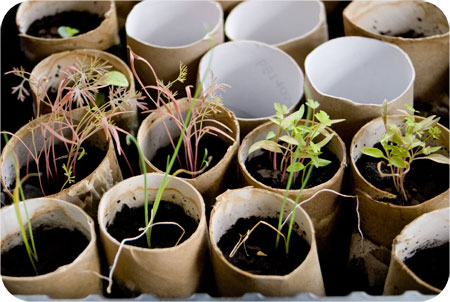 All of our seeds come from either the Diggers Club or more recently from Eden Seeds (who have excellent customer service and turn around times). They both supply open pollinated, old fashioned seeds which I think both grow better, healthier veggies and I seem to have more success getting them to germinate, grow and produce. Plus I can order online and get them delivered! At approx $3 or less per packet of seeds you can grow a LOT of food for not much money.

We live in an area that is prone to very late, hard, frosts and cold nights right up into the start of December. So we start pretty much all of our seeds inside on the kitchen window sill.

I plant seeds into trays of toilet paper rolls so that when they are transplanted I don’t disturb their roots too much. This year, we didn’t remember to save many toilet rolls so I had a quick google and used this method for making ‘pots’ from newspaper. It worked really well and they can also go straight into the ground paper and all disturbing precious roots even less. 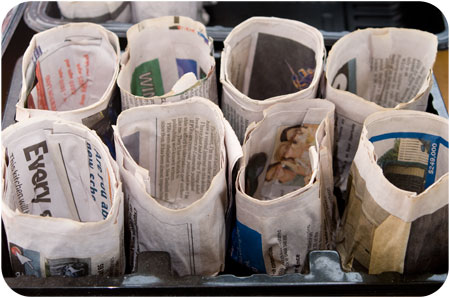 Corn and sunflowers will go straight into the ground when it gets warmer, along with some more beans, pumpkins and melons in the hope of a second cropping late summer, if we are lucky.

We do cheat with some things. We just don’t have a long enough, hot enough summer for things like egg plants, so if we attempt them buy them as seedlings to get a head start. In the past I’ve also bought some tomato seedlings to try and get some early tomatoes (ours never ripen until march!) but we never have much success with this so I’m not sure if I’ll attempt it again this year or not.

Do you grow from seed?
What are you growing this spring/summer season?
Or if you are on the other side of the world what did you grow and are you putting in anything over winter?
Do you have tips or tricks for growing from seed?