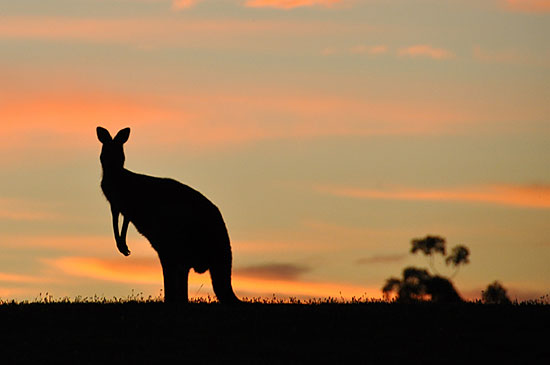 This is not the post I was going to write for this sponsored opportunity.

I had a totally different topic in mind, but the day after getting new Goodyear Assurance TripleMax tyres and reading about how they reduce fuel costs and increase safety in wet weather… well, fate stepped in and the post kind of wrote itself.

Read on and you’ll see why…

It was almost dark and it had started to rain as we headed home.

The kids were tired after swimming and they were talking and singing and fighting all at once. I was tired too and glad to be heading home so I could shove some food into them and throw them all into bed with the hope of a little peace and quiet.

As usual, I was trying to ignore the mayhem in the back and concentrate on driving in the wet, dark conditions. I had heard one too many tales about encounters between cars and roos around here of late, so I was checking the sides of the road for movement as we went.

We turned the corner and headed down the last stretch of road before home. It was really raining now, and as we passed a car going in the other direction I flipped my lights back to high beam and there it was… right in the middle of the road… an enormous kangaroo.

I jammed on the brakes and as we came to a sudden, slightly skidding, halt the line from the Goodyear website that I had read only hours before flashed into my mind – ‘significantly increasing grip and shortening braking distances’ – and I silently thanked the Blogging Gods for sending me a set of brand new Goodyear Assurance TripleMax tyres.

The kids yelled, I think someone burst into tears, and there we sat, stationary in the middle of the road with the massive kangaroo just standing there, scratching his belly.

And when I say ‘massive’, I really mean massive.

He was as tall as the Tarago, really he was… and he just stood there, eyeballing me, as the windscreen wipers flopped back and forth.

I sat there too, stunned.

This was not what I had expected when I had been looking for roos on the road!

“What is it mum?” one of the girls asked…
“It’s a kangaroo” I replied trying to keep my cool. It didn’t work, all hell broke loose in the back…

“You have to check if it has a joey” they demanded.

“It’s not bloody dead!” I hissed.
“I didn’t hit it, and it certainly doesn’t have a joey because it doesn’t have a pouch.” I yelled to the back of the car.

Of course Morgan was only too happy to explain that one “It doesn’t have a pouch because look, it has a huge…”

Everyone stopped and stared as the kangaroo twitched his ears.

“Why is it just standing there?” Zoe asked, curiosity getting the better of her hysteria.
“I don’t know…” I said.

“No!” I cried, realising in that moment that I had failed as a parent since my kids were clearly insane if they wanted to get out of the car, in the rain, and the dark, to pat an enormous kangaroo that obviously wanted to tear us limb from limb.,

I edged the car forward a little. The gigantic roo twitched his ears again and turned his head, but didn’t move.

I tooted my horn. He bent down and for a moment I thought he might move on, but then he stopped, still in the middle of the road, and turned to face me again. I am sure there was hunger in his eyes.

I edged forward again, to a growing chorus of “Don’t run it over! Mum! Don’t kill it!” from the back seat.

I am not sure if it was my approach or the hysterical shrieking from the four kids that finally made the kangaroo decide to give up on the idea of fresh human meat and get the hell out of there, but he scratched his belly one more time, like Skippy on steroids, looked me dead in the eye to make sure I was really freaked out, then hopped off into the darkness.

Adrenaline pumped fiercely through the entire car as we made it the last few hundred metres home without further incident, but that peace and quiet I was hoping for was long gone. 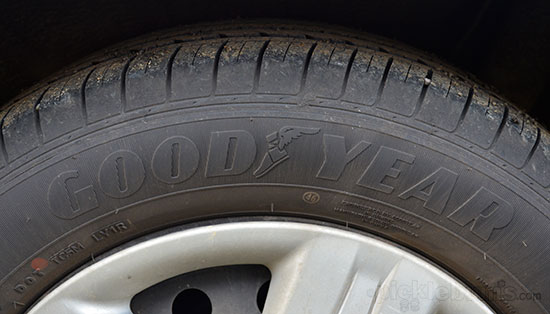 Living on a rural property, we spend a lot of time in the car. We drive everywhere, in all kinds of conditions, on all kinds of roads, usually with all four kids in the back of the Big White Bus. So it’s nice to know that the Goodyear Assurance TripleMax tyres that were popped onto The Big White Bus the other day can cope with all those conditions and keep us all safe.

The fancy new tyres have ‘HYDROGRIP Technology.®’ I don’t really know what that means but it allows drivers to reduce braking distances by more than 2 meters on wet roads… and that means that we didn’t slam straight into a massive killer kangaroo and do us, and the roo, a lot of damage.

We drive a lot of long distances so it is a big plus that the tyres are also designed to last longer and increase fuel savings. Goodyear also share lots of useful money saving tips such as driving slower, checking your tyre pressure monthly and buying tyres with a lower ‘rolling resistance’ like the Assurance Triplemax tyres. Anything that saves us some money in the long run is a good thing.

Goodyear Australia will donate $1 for every Goodyear Assurance TripleMax tyre sold by Beaurepaires and Goodyear Autocare stores during 2013 to Life’s Little Treasures Foundation, a charity which helps families of children born sick or premature. Our twins spent ten weeks in hospital after they were born premature so this is a charity I am happy to support.

So just in case you come across any enormous killer roos while you are driving, or even if you are just out and about in town on wet roads, check out the Goodyear website to find out more about Goodyear Assurance TripleMax tyres.

Have you ever encountered a giant man eating Kangaroo while out driving? No? Well have you had any other close calls and narrowly avoided a car accident?

{No, I didn’t stop to take a photo that night, I am not that dedicated to my blog! The photo at the top of the post is adapted from this one by Chris_Samuel’s, the other photo is a picture of one of my actual, dirty but new, tyres.}

Home » Roo on The Road – Sponsored by Goodyear