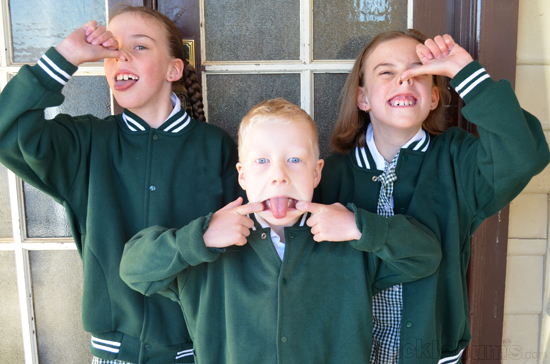 Yesterday was a day of firsts.

My big boy started school for the first time. ( I need a whole other blog post to talk about how much that tugged on my heart.) And yesterday something else big happened.

Anyone who has known our girls for a few years will know how momentous that step was.

For a long time our twins could not be apart. Not ever.

Their attachment to each other is something that has amazed me, made my heart sing and concerned me all at once. I worried about it a lot, over the years, about how stressful it was for them to be apart. It seems that the most popular parenting advice for twins is to work hard at them being ‘individuals’ and allowing them to be so attached to each other that they can’t cope apart is not part of that plan.

I confess… for a long time I had horrible visions of them growing old together, still wearing the same clothes and still sharing a bedroom. Or worse, marrying other twins and living freakish parallel lives that would see them wind up on some trashy reality TV program. That is surely what would happen if we didn’t force them to be ‘individuals’ and force them to separate. Right?

Lucky for my sanity and for my girls we had some excellent advice and support from some wise friends, family, teachers and psychologists.

It was with that pearl of wisdom ringing in our ears and an immense sense of relief that we had not (yet) scarred our twins for life by allowing them to be similar, that we began our journey towards school.

I know that goes against a lot of advice given to parents of multiples. I know that it is not something that would work for all families, but for our girls, it was exactly what they needed. We needed to honor who they were, without trying to change them and advocate for what was best for them, our individual children.

We felt strongly that school should not be a place of extreme stress, especially in those first years and we knew from experience that separating our girls before they were ready would be catastrophic for them.

They needed to be challenged to be more independent but not pushed or forced. They needed lots of small opportunities to branch out and practice coping on their own and that is exactly what school provided.

Their first year at school was fabulous. They shared a classroom and spent lots of time together and some time apart. They had gone from children who could not sit at separate snack tables at preschool without tears, to children who were happy to be put in different groups at sport and who confidently chose different elective subjects to participate in without encouragement.

There were a few wonky moments in the beginning, but with fabulous teachers who embraced our girls differences AND similarities they blossomed.

They shared a classroom for prep (first year of school), grade one and grade two. At the end of each year I would have a chat with their current teacher and ask if there were any issues with them being in the same class. Each year I was told no… they worked well together and well apart, they rarely impacted negatively on each other and there was no reason for them not to be in the same class again.

Our plan had always been to keep them together until such time that they asked to be apart. Towards the end of last year they began talking about being in different classes.

At first it was an idle threat spat at each other in frustration during an altercation. Then it became quiet chats about the possibilities, then questions asked of me. It seemed the time had come.

At the end of the year we had a chat and I asked them both, “do you want to be in the same or different classes next year?” When push came to shove, no one wanted to be the one who made the final decision, they both hedged their bets and said they didn’t care either way.

I chickened out too, and I told school they could decide… though I knew, and school knew that that was our way of saying yes… put them in separate classes.

So yesterday morning I dropped them off in their classrooms, one at a time. I could feel their first day nerves and I knew they were tinged with the strangeness of not having each other, right there. But I could also feel their excitement about starting a new school year, and I marveled at their resilience in coping with minor set backs (a favoured friend not being in one class, a preferred teacher not in the other).

Giving them time to grow, develop and become independent from each other without excessive stress was the right thing for our girls. It may not be the right thing for other sets of twins, but it was right for us. That is why I think it is important for schools not to have a blanket policy on whether twins are separated or not. Assess a twins needs on an individual basis, and do what is best for them.

Of course it is early days yet and I am sure this year will throw up many challenges, but I am so very proud of how far my ever so attached to each other twins have come since that day, nine years ago, when they were dragged into the world before any of us were really ready.