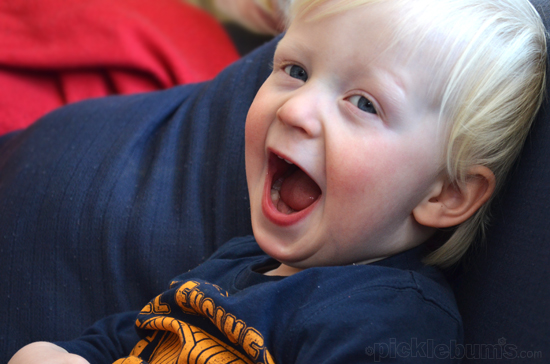 “Oh is he toilet trained yet?”

I had hoped the conversation would end there. After all, toilet training is the ‘do they sleep through the night’ of toddler-hood and since my toddler was obviously lacking in that area I assumed this conversation with the ‘nice-mum-of-a-similar-aged-child’ in the park would end right there, but it didn’t…

“Oh you need to do a sticker chart! Make a reward chart and every time he wees on the potty he gets a sticker, and then when he’s wee-ed ten times he gets a lolly! That’ll have him toilet trained in no time!”.

“Oh he’s not all that fond of lollies…” I muttered as the toddler in question pipped in with “Yolly? I have a yolly?”

“Oh then just use something else. He’s just manipulating you. He just needs a good shove to pee on the potty and you just have to find the right thing to motivate him. What about trains? Mine loves trains…”

I wonder if she saw the look on my face as I frantically tried to work out how to be polite, but not agree. I ended up lying…

“oh look the swings are free, lets hurry over because I know you really wanted a swing today…” and suddenly we had to rush off to the other end of the park…

You see the thing is, reward charts have never graced the walls of our home.

Not during the years and tears of helping the girls use the toilet, not when Izzy decided biting her sister was the best way to vent her frustrations, not when the big boy transitioned to his own bed and learned to go to sleep on his own, and not now that the toddler is magically two but still uninterested in the toilet.

Reward charts are not for us.

Why not? Well… lets see, what would I have said to that Mum in the park if it had been appropriate…

We choose not to motivate our kids using external and unrelated reward systems like sticker charts for a few reasons.

Reward charts tend to look at one tiny facet of behavior, and not look at the child or the situation as a whole. They assume that the child simply chooses to behave in one particular way and is able to change their behavior at the drop of a hat simply because they will get a reward. But behavior doesn’t occur in a vacuum.

Almost always a child’s behavior is more than just what you see on the outside. It is more than just not wanting to go to the toilet, or not wanting to go to bed, and it is almost always not something they can simply turn on and off at will. Looking at the picture as a whole, thinking about why my child is behaving in this way, always works better for us than unrelated bribes or rewards. What is my child’s behavior trying to tell me? What need is not being met? What things can I change to guide them to more appropriate behavior? How can I support my child through this challenge?

When it comes to toilet training and reward charts the assumption is that the child is actually able to feel when they need to go to the toilet and control it, that it is a simple choice… that the child merely needs a ‘shove’ to ‘get over’ whatever is bothering them about using the toilet and they’ll be fine. I know from experience that is not always the case.

Had I used a reward chart for my girls when they were toilet training I would have been setting them up to fail. They simply were not physically ready for a long time, and dangling stickers or lollies in front of them wouldn’t have changed that fact. A reward chart would have become a punishment for something they had no control over and set us up for more anxiety and upset that we were already dealing with. Even with a normally developing child… even as an adult… can you pee or poop on demand?

I also don’t like to use reward charts because I feel it teaches my kids that the only things worth doing are those that get them some kind of reward.

Plus I am a lazy parent. I really don’t want to set my kids to up to always ask for a sticker or a lolly every time they do something good, that’s too hard for me.

I want to build my kid’s understanding and skills and intrinsic motivation so that in the long run they know what is right and wrong, and hopefully, behave accordingly. I want them to be able to listen to their bodies and know when they need to go to bed, or pee, or eat, rather than waiting for a reward to be dangled in front of their faces. Until then I will help them, remind them, support them, encourage them, show them, model for them, talk to them, and love them.

And lets not get me started on using food as rewards… because in my opinion food should never be a bribe or reward.

I am not saying that reward charts are evil incarnate. I think there may be some children and certain behavioral issues where a reward chart works wonders… but for our kids and when it comes to things like toilet training a two year old… reward charts are not for us.

So there you have it… that is what I would have said to that well meaning mum in the park… Except that it just isn’t appropriate to lecture someone you don’t know, just because their parenting ideas differ to yours…

What about you? Do you reward charts work for you and your kids?

Home » Why Reward Charts are Not For Us…