My big boy comes rushing in clutching his cheek and wailing.

I know what has happened before he even takes his hand away, the toddler has bitten him.

There are deep purple marks where his sharp little teeth have punctured the flesh on his brother’s cheek, and no amount of ice is going to hide the fact that my toddler bites.

I am so glad that it is his brother the toddler has bitten and not someone else’s child, but I’m also filled with shame. I’m sure everyone will know that I am a terrible parent, I can’t even stop my toddler biting his own brother. No one will be playing with my toddler at playgroup, or inviting him to a birthday party, no one wants a biter around. 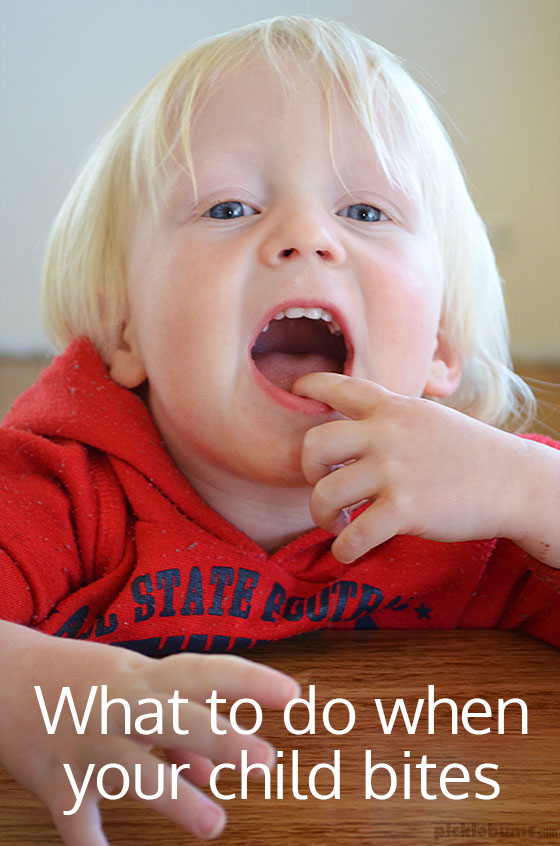 Despite the fact that I worked in the early childhood education field for ten years, and I have four kids, and I know it’s very common for toddlers to bite, and that it often happens suddenly and without warning, and that it’s not an indication of how good or bad a parent I am, I still feel the stigma that a biting child often attracts.

But while biting may seem like an extreme and violent behaviour to us adults, for a young child biting is very similar to hitting or lashing out in other ways. Trying to keep my reaction in proportion is the first thing I need to do and then I can put in place some strategies for what to do when kids bite.

Kids bite for many reasons – anxiety, frustration, competition, exploration, attention, imitation, teething – and figuring out why a child bites is the best way to deal with it.

It’s not always easy to work out why a child is biting, but if you look at the behaviour leading up to the bite, take into account the age and stage of the child, and think about any other bigger issues, these will all give you clues as to what triggered the biting behaviour.

You need to set aside your shock, shame or anger and try to look at the situation from your child’s point of view. What might they have been thinking or feeling right before the bite occurred?

In our family biting seemed to happen in two situations:

1)The boys would be playing well together, but then I’d hear a scream of pain and discover that there had been an argument and the toddler had bitten his older brother.

2)Or, sometimes it happened when the boys were mucking around playing rough and tumble and the toddler bites, seemingly ‘out of the blue’, without being provoked.

In the case of the argument, I think the toddler was biting his brother when he felt powerless, when he was frustrated and couldn’t make his feelings understood, and when he was overwhelmed by the situation. Noah wants a toy but his bigger, stronger, more articulate brother takes it away and won’t give it back no matter what he does. He feels powerless and angry and he lashes out by biting.

In the case of the rough and tumble play, I think it was either similar frustration when he couldn’t make his needs understood, or it was part of getting carried away with the game and giving in to the more animal-like side and sinking his teeth in just because it felt good.

I know that sounds a bit crazy, but think about it. When you are tense and frustrated, or when the adrenalin is pumping and you are over excited, do you sometimes feel like pumping the air, or throwing or kicking something to release that energy? Think about how good it might feel to sink your teeth into something nice and springy, yet firm, to release that tension?

What stops us adults (and older children) from biting some nice pink flesh is understanding there is a consequence to that action – someone will be hurt and I will feel bad and probably get in trouble. We are able to think about the consequences of our actions and stop ourselves before it happens, but young children are not able to think things through so clearly, or even understand that there will be consequences to their actions. They act on impulse and if it feels good to sink your teeth into something they do it, without thinking about what happens after that.

What to do when kids bite

Once you have an idea why your child is biting you can work out a plan to change the behaviour.

These are general suggestions, but you will get the best response by tailoring your actions to the needs to your individual child.

One thing you may notice about all these suggestions is that you need to be there. You need to step in before the biting happens, and help guide the child to a more appropriate behaviour. I know that takes a lot of time and effort, and I know it’s not always possible, but being there to step in before something happens is the best way to prevent most difficult behaviors in social situations, especially biting. 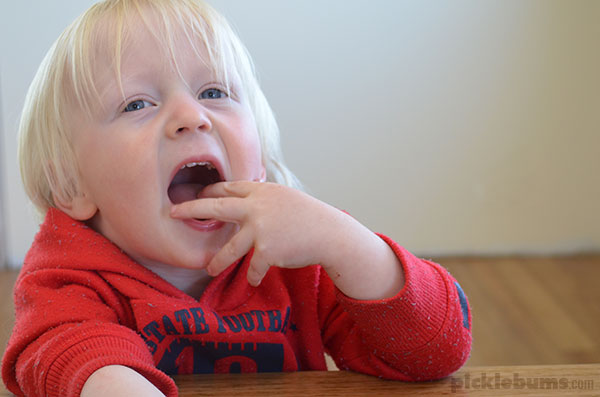 This is how we coped with a biting toddler:

For my biting toddler the answer was to help him make his feelings understood when he was frustrated, and to help him find a better alternative to biting when he was feeling angry. That meant stepping in when we saw him getting frustrating and helping him manage the situation. Sometimes that meant saying the words for him – ‘I really want that toy, please give it back’ – sometimes that meant explaining why he couldn’t have what he wanted and helping him calm down or release the tension another way.

We also reminded him how to be gentle when those rough and tumble games started by saying “remember to be gentle with each other, no punching, kicking or biting”.

We also helped him to see what the consequences of biting are. When he bites we would say “that hurt Morgan really badly, he is really sad, biting really hurts”, or something similar. We don’t expect a two year old to really understand the consequences, or remember them when he is ‘in the moment’, but it is a step towards that for when he is more mature.

We also helped the bigger kids understand why Noey bites, so they could help us identify the situations and hopefully avoid a bite. They were able to understand the types of situations that might escalate and to know that if they came and asked we would always come and help.

Because the biting mostly only happened at home, we really just needed to wait for Noah to grow out of it. If we react with understanding, make sure we address the cause, and continue to connect with our biting toddler, he will grow out of it when he gains more verbal and social skills.

But I was also aware of the potential for him to bite in other situations. In those situations I made sure to keep an eye on him, looking out for situations we knew he might find frustrating and that could lead to him biting. It’s exhausting being a toddler’s shadow sometimes, but I knew this was the best way to stop him hurting others and to help him learn. I also knew it wouldn’t last forever.

Do you bite them back?

I am not in favour of the ‘bite them back’ theory.

In my opinion, biting a child when they bit sends the message that it is ok to bite, which is confusing when you’ve just told your child not to bite and how much it hurts. It also teaches them that it is ok for bigger, stronger, older people to hurt smaller, younger, weaker people and that is not a message I want to send to my children.

A young child isn’t able to connect you biting them with anything they have done, they just feel hurt and confused and it may increase the biting rather than decrease it.

I think there are better ways to help a biter see how their behaviours have affected others.

The key to coping with biting for us has been to deal with the underlying cause, and to have a quick ‘positive first response’.

What do you do when kids bite?

Do you have a biter? Don’t worry, you are not alone, and it will get better!
How have you been dealing with biting?

(This post was first published back in 2012. Since then my toddler has grown up and stopped biting, and I’ve updated and reshared this post, which is why some of the comments are from way back in 2012)

Home » What to do When Kids Bite.